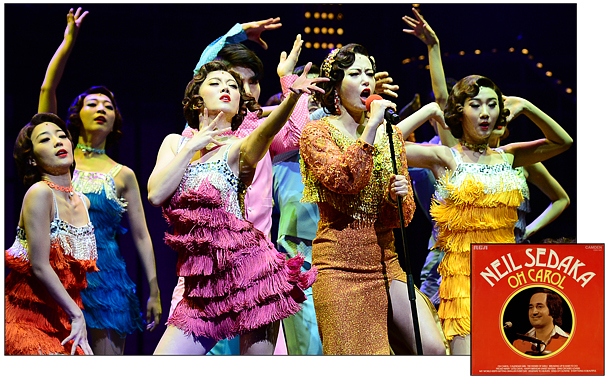 “Oh! Carol,” which is a Korean adaptation of the jukebox musical “Breaking Up is Hard To Do,” is based on the popular songs of Neil Sedaka including “Where the Boys Are,” “One Way Ticket,” and many more. At right is the cover of Sedaka’s album that includes “Oh! Carol.” [NEWSIS]

Those not in their 20s and 30s tend to think there’s no place for them in the musical world, regarding the genre of performing arts as young people’s way of enjoying culture. But, they may have to think again.

There are three new shows that are premiering in Korea this winter that will appeal to the older generation, creating nostalgia with toe-tapping songs and tales from their younger days.

“Oh! Carol,” currently being performed at the Kwanglim Art Center’s BBCH Hall in Apgujeong-dong, southern Seoul, is a Korean adaptation of “Breaking Up is Hard To Do,” a jukebox musical based on songs by Neil Sedaka that premiered in the U.S. in 2005. But instead of using the same title, named after Sedaka’s signature song, the Korean production company, Show Media Group, decided to name it “Oh! Carol,” which is what the show has been called in other countries as well.

“Instead of calling the musical ‘Breaking Up is Hard To Do,’ which is difficult to translate in Korean, we decided to give it an easier name,” said Park Young-seok, Korean producer of the musical. “A [different] name, in fact, makes sense because we’ve actually changed about 95 percent of the script to suit Korean audiences and added songs by Sedaka that Koreans are more familiar with.”

During the 1950s and 60s, when Koreans were more accustomed to listening to the radio all day long, as owning a television was a luxury, Sedaka’s songs including “Where the Boys Are,” “Sweet Sixteen,” “One Way Ticket,” “Stupid Cupid,” and of course, “Oh! Carol” were frequently played, said Park, explaining the reason why he wanted to adapt the musical for Korea’s somewhat older generation who are not used to watching musicals.

Director Han Jin-seob, also said that he didn’t hesitate to direct the musical as he’s also from that generation, adding that he wanted to stage a show that can also be enjoyed to the fullest by those in their 60s.

Like the original, the musical follows six characters at Esther’s Paradise resort in the summer of 1960. Two other women, Lois and Marge visit the resort to meet some boys. Male characters include Harvey (played by Nam Kyung-joo, Seo Young-joo and Seo Bum-suk), a veteran emcee at the Paradise resort who is in love with Esther, Del (played by Jung Sang-yoon and Seo Kyung-soo) a popular singer at the resort, and Gabe (played by Hur Gyu and Sung Doo-seob), an employee at the Paradise.

The Korean production of the musical “The Bodyguard,” based on the 1992 hit film of the same name and the musical “The Moon of Seoul,” starring actor Lee Pill-mo, second from left, based on the hit 1994 drama series, will be nostalgic for older audiences. Lee plays Hong-shik, originally played by Han Seok-kyu, right. [CJ E&M, SEOUL METROPOLITAN MUSICAL THEATER, JOONGANG ILBO]

Another piece that is bound to attract men and women of all ages is the musical “The Bodyguard.” As a stage version of the 1992 hit film “The Bodyguard,” which stars Whitney Houston as pop diva Rachel Marron and Kevin Costner as Rachel’s bodyguard Frank Farmer, the musical brings a wave of nostalgia for the old days.

“As in the way the production is staged, we used an element called ‘iris,’” said Jason Capewell, the musical’s cooperative director, “in which the set closes down from above and to the side. It then reopens to show a different scene, giving a cinematic quality.”

The musical features 15 hit songs by Houston including “I Will Always Love You,” “I Have Nothing” and “Run To You,” among others. Since the musical’s premiere in 2012 at London’s West End, the piece has been traveling around Europe visiting Ireland, Germany and the Netherlands, and Korea is its first stop in an Asian nation.

As Whitney Houston’s songs are famous for their large range, veteran musical actress Jeong Sun-ah and well-known vocalists Lee Eun-jin, who also goes by her stagename Yangpa, and Son Seung-yeon take the role of Rachel Marron, and will be performing the powerful songs on stage.

The thrilling story revolves around the relationship between Rachel and Frank. As Rachel is threatened by an unknown stalker, Frank comes to follow every move she makes. She disapproves of his thorough rules and principles at first, but behind her objection lies a delicate heart yearning for true love.

The Moon of Seoul

The weekend drama that had a nearly 50 percent viewer rating each time it aired over 81 episodes in 1994 has been turned into a musical by the Seoul Metropolitan Musical Theater. Written by playwright Kim Woon-kyung, the popular drama that depicts young Korean men living in a shanty hillside neighborhood in Seoul trying to achieve success in society, introduced now-veteran actors Han Seok-kyu, Choi Min-sik and actress Chae Si-ra to stardom.

“It’s a drama that made nearly half of Koreans in the early 90s cry and laugh,” said David Lee, who rewrote the script to squeeze in the 81 episode-drama that ran for 10 months straight into a two hour stage musical. “So I discussed it with the producers and we decided to compress the story and focus on the main characters Choon-seob and Hong-shik. The story will develop rapidly and is not set in the early 1990s like the drama but in the present day. It will be quite different to the drama, yet close enough to make older audiences get lost in old memories while watching the show.”

In the television drama series, main character Choon-seob, played by Han, often shouted “Boys be ambitious” in English, which was his life motto to encourage himself and his friends who were enduring hardships to succeed and achieve their dreams. The phrase quickly became a common chant of the day.