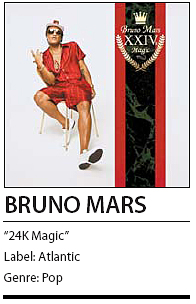 Bruno Mars pays homage to his musical influences with a groovy, R&B-inspired collection that sounds straight out of the ‘90s. “24K Magic” is a party album that recalls Michael Jackson, James Brown, New Edition and retro boy-band harmonies. It’s just a shame it’s only 34 minutes long.

Mars has said he hopes his first album in four years inspires listeners to dance, and “24K Magic” succeeds. The title track (and hit single) sets the toe-tapping tone for the dance-party groove that follows. On “Chunky,” Mars sings, “If you ain’t here to party, take your ass back home.” And even the late Godfather of Soul would shake his hips to “Perm,” where Bruno channels his best Brown over trumpet-tinged funk. “

The album plays like a dance party, with slow jams built in to catch your breath. Mars reaches for a Jackson-inspired falsetto on the ballad “Versace on the Floor” and goes for more of a Boyz II Men vibe on “Calling All My Lovelies.”

It’s a shift in direction for the multi-Grammy Award-winning entertainer. The result is a groovy party that ends too soon. AP