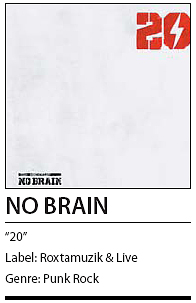 The explosive live energy and stadium anthems associated with this punk rock band have been celebrated by Korean headbangers for twenty years. Since the band held their debut performance at an underground club in Hongdae in 1996, the group has been attributed to playing a major role in sustaining the rather small punk rock scene in Korea, and is among the first generation acts in the genre.

The band is celebrating their 20th anniversary with a rerecording of eight of their most famous songs, as well as two new tracks. Fans will appreciate the exceptional audio qualities of their favorite songs such as “You Fell For Me” and the ska-inspired “Sea Man,” and the tracklist does an impressive job of covering wide ground from their extensive history.

The two new additions “Roll It” and “Not This or That” also see the band return to their original form with their addictive chorus lines and guitar hooks, while the composition of the tracks indicates a noticeable maturation of their songwriting.