‘Post-Park Geun-hye era is a bigger problem for Korea’

‘Post-Park Geun-hye era is a bigger problem for Korea’ 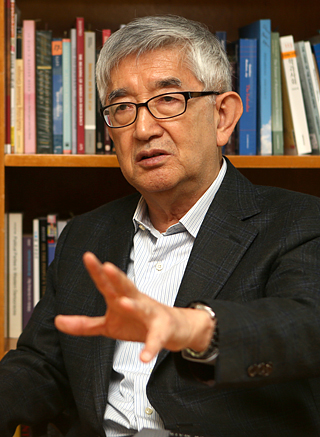 The hundreds of thousands of candlelights at Gwanghwamun Square over the past month epitomize how much progress Korea has made in terms of democratization. The nonviolent demonstrations which went live on-air through multiple channels inside and outside Korea showed that the small and large-scale protests that continuously took place since the 1960s were not for nothing.

However, Choi Jang-jip, an emeritus professor of political science at Korea University, says that such progress does not yet signal the arrival of complete democracy. “It means only a half,” he said in a recent interview with the JoongAng Ilbo.

What is more important now, according to Choi, is how the political scene responds after the Park Geun-hye administration finishes. If not properly approached, the 30 years of hard work to achieve democratization will go down the drain.

“Demonstrating a proper form of democratic protest does not mean everything has now been achieved,” Choi said. “The government that comes after is just as important. How well they manage the country and propose proper policy in order to enhance the overall social and cultural quality of people’s lives is another half of democracy.”

Choi expects the National Assembly will not have much problem proceeding with the impeachment of President Park and appointing a new prime minister. He said terminating the so-called Park Chung Hee paradigm, wherein government operation relies heavily on the president’s authority, is the only way to prevent any similar chaos in the future. Otherwise, the relics of the authoritative old government will rise again sooner or later in distorted forms.


Q. In the history of Korean government, this is the first time an incumbent president has been called a key suspect in an influence-peddling case. How do you feel about that?

A. I believe Park Geun-hye’s private and distinctive background as Park Chung Hee’s daughter and the many limits that Korea’s democracy has shown in the past years have led to the current crisis involving Park Geun-hye’s confidante Choi Soon-sil.


Why did you pick Park Geun-hye’s individual background as a specific factor behind all this?

She did not spend her youth in ordinary society but was raised under a specific familial environment which is why sometimes she is described as a “princess.” Under that circumstance, the relationship between her and Choi Soon-sil and Choi’s late father Choi Tae-min evolved. How President Park came to understand politics and society was through her father Park Chung Hee’s administration, where everything stood in the opposite side of real democracy.


Then what do you mean by the limits of democracy after democratization?

The so-called Park Chung Hee paradigm, which Park Geun-hye has relied on during her tenure, enabled an underdeveloped Korea in the 1960s and 70s to achieve immense industrialization and ultimately become a developing country. It became a major stepping stone for Korea to be the 13th or 14th largest economic power in the world. However, the paradigm possessed many limits in terms of democracy.


What kind of limits?

There are two. First, the idea that it cannot go side by side with democratic norms. The idea relies on a powerful president who sits on top of a social and political ladder and controls the country. The key factor in this paradigm is the alliance with chaebol. Laborers were also a major driving force behind industrialization, but they were mostly suppressed and didn’t have power.

The second limit is society’s transformation. The characteristic of industry during the ’60s and ’70s was manufacturing that relied heavily on exports. However, after the financial crisis of the late ’90s, Korea started to aggressively implement neoliberalism that rejects government intrusion.


Could you more specifically describe how the economic structure changed after the financial crisis?

The key element of neoliberalism is emphasizing small government and the importance of free markets and competition. It rejects government intrusion in economic activities and wants to privatize many economic entities. That will ultimately lead to the increased importance of financial capital.

Technology has also become a driving force behind economic development. Now, we are in an era where high-level technology and knowledge-based services have become more important than manufacturing. Despite such social changes, Park Geun-hye only knows how to revive what her father has done and implement her father’s ideas in present-day society, which of course does not work.


Do you have any suggestion for what Park should have done?

If she wanted to make her father’s achievements more notable, she should have more actively realized democratic policies because her father’s model was an incomplete one in terms of democracy. If she had gone to compensate that missing part, that would have made perfect father-daughter teamwork.

However, President Park decided to go the opposite way, which resulted in complete destruction. It was apparent in the Choi Soon-sil scandal. Park exerted imperial-like authority while crossing the line with her private relationship as well.


What will happen after the Park Geun-hye administration? Will politicians be able to resolve the anger that is currently sweeping the country?

Her role as president is now over. It is time to think about the next chapter. I firmly believe there is an answer. It is to find the paradigm that can replace that of Park Chung Hee which has represented Korean society until now.


What would be an alternative paradigm?

Privatizing economic entities in Western countries means minimizing the government’s role. But in Korea, governmental power has influenced the private sector which is why, as shown in the recent Choi Soon-sil incident, the government could pressure the CJ Group vice chairman to step down just because the vice chairman did not cooperate with the government and why it could tell KT or Posco, both of which were once state-owned but now privatized, to appoint somebody specific to executive posts. Conglomerates in Korea have unrivaled positions in their own business sectors, but the government can force their fake loyalty and have them line up in front of their doors.


Do you see the absence of liberalism as the main weakness in Korea’s democracy?

When we were fighting for democracy before 1987, the slogan at the time was “picking our own president.” That was done with President Park, but we all realized being able to vote for our own president does not guarantee full operation of democracy. In what form the government operates is also another core element of democracy.


What do you say to emerging talk of reforming our constitution?

If there is problem with the form of the government, constitutional reform would mean something. But right now, there are some problems with how politicians are trying to reform the constitution. Politicians have to know precisely what is wrong with current politics and how that can be amended through changes in legislation. Then they should narrow down the issue and bring about consensus among politicians before they really get into a discussion.

Constitutional reform is a very complex agenda. It cannot be done properly while issues related to Park Geun-hye are yet to be resolved.

Even if constitutional reform takes place now, it will be nothing more than the outcome of each party’s political benefit. I believe it is the right order to take care of President Park’s impeachment first and then the next election before talking about reforming the constitution.


What do you think about impeaching President Park Geun-hye?

I think it is important to carry out the procedure based on the constitution. It will be very unlikely for the president to step down on her own.

Under the premise that Park won’t resign on her own, the National Assembly will have to properly follow the right procedures.

It would be better if she decides to step down along the way. The public is asking her to resign, but they cannot decide and manage the exact steps she needs to take. That is up to the legislature and parties.