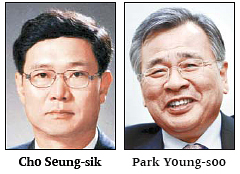 Opposition parties Tuesday recommended two former prosecutors as candidates to lead an independent counsel investigation of an influence-peddling and abuse of power scandal that almost certainly will cut short the tenure of President Park Geun-hye.

The Minjoo Party, Peoples’ Party and Justice Party made a joint decision to nominate Cho Seung-sik and Park Young-soo, both now in private legal practice after years in the prosecution, as the final two candidates to lead a special counsel probe into the scandal over the influence in government of presidential friend Choi Soon-sil.

President Park has until Friday to choose one of the two to run the largest independent counsel team ever, which will have up to 120 days to complete a probe into the president and her inner circle.

Ki Dong-min, spokesperson of the main opposition Minjoo Party, said the candidates can conduct a thorough investigation without being “shaken by political pressure.”

“We made our decision on the candidates, taking into account their high integrity and proven investigative capabilities,” said Ki before reporters at the National Assembly.

Cho, born in South Chungcheong and a graduate of Seoul National University (SNU) with a major in law, retired from the prosecution following a stint as the director of the criminal investigation bureau at the Supreme Prosecutors’ Office.

Park was born on Jeju Island and graduated from SNU with a degree in philosophy. He climbed the ranks in the elite investigative body to serve as head of the Seoul High Prosecutors’ Office before becoming a private lawyer.

The opposition’s choices appeared to reflect speculation that President Park may opt to reject the nominations if she considers them to be politically partisan. On that note, Rep. Ki said the two were free from political leanings.

The fact that Cho and Park, both 64, are from South Chungcheong and Jeju seem to demonstrate the opposition’s careful approach. In Korea’s politics of regions, Chungcheong and Jeju are not defined by a distinct political leaning as opposed to Jeolla, the traditional support base for liberals, and Gyeongsang, the backbone of the conservatives.

All allegations stemming from the scandal will be investigated.