Melee erupts at a memorial for Park’s mother

Melee erupts at a memorial for Park’s mother 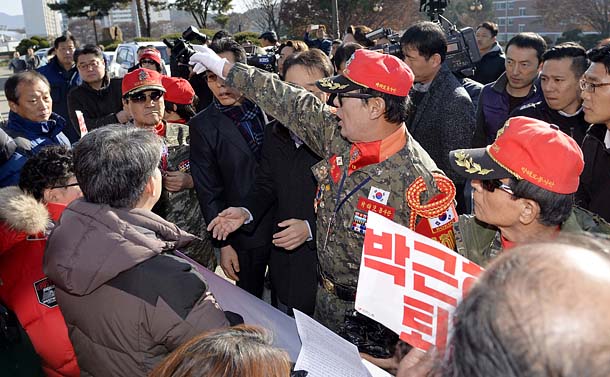 A man clad in a militaristic uniform, a member of a group of avid supporters of President Park Geun-hye, shouts at members of a civic group calling for the ouster of the president, at a skirmish that took place on Tuesday in front of a town hall in Okcheon County, North Gyeongsang, where a memorial service to honor the birth of Park’s mother Yuk Young-soo was held. [KIM SUNG-TAE]

A memorial service to honor the 91st anniversary of the birth of President Park Geun-hye’s mother Yuk Young-soo at her birthplace in North Gyeongsang went awry after a scuffle broke out between supporters of Park and members of a civic group calling for her resignation.

“Is it really right to hold a memorial service to honor Yuk, when her daughter is mired in such a scandal?” shouted members of an anti-Park civic group based in Okcheon County, North Chungcheong.

Yuk was born in Okcheon on Nov. 29, 1925. She was shot and killed by a Japanese-born North Korean sympathizer during an assassination attempt on her husband President Park Chung Hee in 1974.

“How did the president do you wrong?” yelled a middle-aged Park supporter among dozens of people huddled together. “You answer me!”

Among those scuffling in front of the town hall in Okcheon where the memorial service was held a few men in militaristic uniforms could be spotted.

They call themselves “the Marine Corps officers who love President Park Geun-hye,” but the real Marine Corps have disavowed them for years.

They started singing the national anthem at the top of their lungs to drown out the hubbub between the self-proclaimed fans and adversaries of Park.

Some 20 members of the civic group chanted, “Cease immediately the memorial service for Yuk Young-soo!”

The brouhaha went on for an hour, with people hurling expletives at each other and a picket that read, “Detain Park Geun-hye, daughter of a dictator.” A Park supporter snapped the picket in half. No serious injuries took place.

The scuffle was similar to one that broke out at a memorial service to honor former President Park Chung Hee’s birth in Gumi, North Gyeongsang, on Nov. 14. A woman who held up a picket demanding the president’s resignation was assaulted by some 10 self-proclaimed supporters of Park.

“We are enraged that Okcheon County is the hometown to Yuk,” said a member of the Okcheon-based anti-Park civic group, “because her daughter is making many people’s lives miserable.”

The memorial service concluded in 40 minutes, nearly half its usual running time of one and a half hours. Some 100 people participated, a drop from the yearly average of 900. No high-level district government officials attended.

“In light of the recent scandal surrounding Park, we scaled down the service, cancelling cultural events and such,” said Kim Seung-ryong, director of the Okcheon Cultural Center.

Since 2010, the Okcheon Cultural Center has been in charge of preparing memorial services to honor the birth and death of Yuk. It spent some 7 million won ($5,979) in the past six years on the services, which are completely funded by the Okcheon County Office.

“We will continue to demand the county office stop funding the memorial services,” said Oh Dae-sung, a representative of the anti-Park civic group.