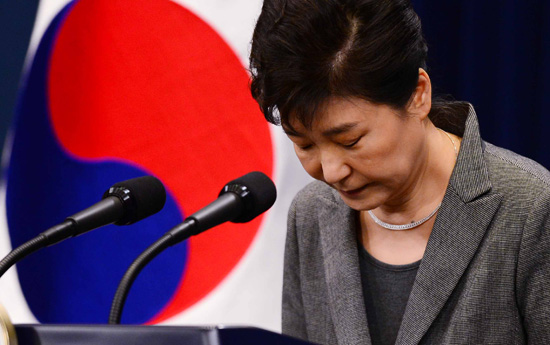 President Park Geun-hye issues a statement from the Blue House on Tuesday in which she asked the National Assembly to decide the fate of her presidency and a timetable for her resignation. [NEWSIS]

President Park Geun-hye said Tuesday she will ask the National Assembly to decide the fate of her presidency, including a timeline for her resignation.

The disgraced president issued a statement to the nation from the Blue House to address the growing public clamor for her resignation over a snowballing abuse of power scandal. The statement was aired live.

“Now, I want to make public my decision,” Park said. “I will let the National Assembly decide my fate, including a plan to shorten my presidential term. The ruling and opposition party politicians should discuss and create a plan to minimize chaos and the vacuum in state affairs and hand over the administration with stability. I will step down based on that timeline and legal procedures.

“I have surrendered everything now,” she said, issuing a third apology to the people, but refusing the public demand for immediate resignation.

The third televised statement about the scandal was issued as Park faced growing accusations about her role in a massive abuse of power and corruption scandal involving her friend Choi Soon-sil and associates. It also came as opposition parties and some lawmakers in her own ruling party were preparing a motion to impeach her. They were planning to vote on an impeachment motion as early as Friday.
After weeks of investigation, the prosecution indicted Choi and two former presidential aides on a range of charges, including coercion of money from big companies and the creation of slush funds. The prosecutors called Park a “co-conspirator” in most of the alleged crimes.

Prosecutors said they could not indict Park because of presidential immunity stipulated in the Constitution. She can still be charged after her term ends, however.