Lee Dae-ho discusses his life as an athlete, husband and father during an interview with the JoongAng Ilbo in Seoul. After playing one season with the Seattle Mariners, the “Big Boy” has yet to find a new home. [JUN MIN-KYU]

Power hitter Lee Dae-ho, who played one Major League Baseball season with the Seattle Mariners, has yet to find a home for next year. Despite the uncertainty, the 34-year-old slugger nicknamed “Big Boy” said he can always count on his family when push comes to shove, during a recent interview with the JoongAng Ilbo in Seoul where he discussed his life as an athlete, husband and father.

Lee is the first position player out of Korea to compete in Korea, Japan and the United States. Without a spot in the Major League guaranteed, he flew across the Pacific to Seattle, where he inked a $4 million contract, including incentives, with the Seattle Mariners on the condition that he survive spring training. He would have to prove himself in the exhibition games in March.

For the slugger who has broken records in Korea and Japan, a chance was all he could ask for. “I knew I was likely to fail when I first took a crack at the MLB,” Lee said. “Looking at my life in the bigger picture, just the fact that I was up for the challenge is enough to satisfy me.”

When Lee first left for the United States, his departure from Incheon International Airport was a quiet one, unlike his compatriots who made their grand debut in the MLB with a press conference, namely Oh Seung-hwan of the St. Louis Cardinals, Kim Hyun-soo of the Baltimore Orioles and Park Byung-ho of the Minnesota Twins. 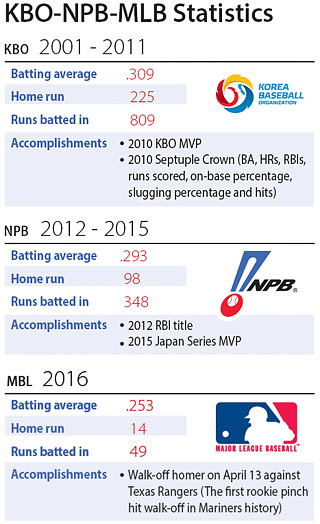 After putting out an impressive performance in spring training, Lee worked his way to the opening day roster of the Mariners. “He has a history of hitting left-handers and I think he has given us reason to believe in spring training,” said the Mariners’ general manager, Jerry Dipoto, after announcing the roster. “He’s very prepared, very calm in the batter’s box. He’s gotten better every step of the way ... and it’s been a pleasant surprise, the defensive and especially the base running.”

During the regular season, Lee mainly switched off with Adam Lind and was mobilized mainly against southpaw pitchers. The highlight of his year came on April 13 when he slugged a walk-off homer against the Texas Rangers. It was the first walk-off home run by a rookie pinch hitter in Mariners history.

During the first half of the season, Lee played in 64 games and batted .288, producing 12 home runs and 37 runs batted in. Lee was selected by fans as player of the game nine times.

Aside from the nickname “Big Boy,” which Korean and Japanese fans bestowed on him for his large presence, the Mariners have come around to calling him “DHL,” derived from his official name with the club “Dae Ho Lee.” It was a testament to Lee’s contributions to the team, delivering hits like the one on April 13 whenever they were in a pinch.

“I remember laughing with my teammates when the front desk staff put up a photo of a DHL deliveryman with my face photoshopped on top,” Lee recalled.

The honeymoon ended in July, when he started feeling pain on his right hand and was eventually opted to the minors for rehab. He eventually made it back up to the Mariners in August, but he couldn’t swing his bat as powerfully as before. By the end of the season, in a total of 104 games for the Mariners, Lee batted .253 while registering 14 home runs and 49 RBIs.

“At first, I was all excited, but I couldn’t keep a steady pace throughout the entire season,” Lee said. “But I do not regret going to the Major League. It was an invaluable experience to be able to play alongside some of the best players in the world.”

After the contract expired with the Mariners, Lee became a free agent but still doesn’t know where he’ll be next year. His priority is to stay in the MLB, but Lee still has doors open in Korea and Japan. “Frankly, I don’t really have much to say since nothing’s decided,” he lamented. “If I played well until the end, I would have landed a deal with an MLB club.”

There was a pang of regret and disappointment, but when he started discussing his family, his face immediately lightened up. Lee married his wife in 2009, and the two have one daughter and one son. Their son was born in Seattle in March, when Lee’s placement with the Mariners was still up in the air. Still, he managed to take some time off from spring training in Arizona to be with his wife and kids in Washington. “Family takes priority over baseball,” Lee said. “Without my family, there is no point of all this, of baseball.”

“After my son was born [in March], some people around me said I should raise him as a baseball player to follow in my footsteps,” Lee recalled. “But do I want my boy to become a baseball player? No. If he wanted to play ball, he would have to be really good. Wouldn’t that be a little difficult, to survive in this world?”