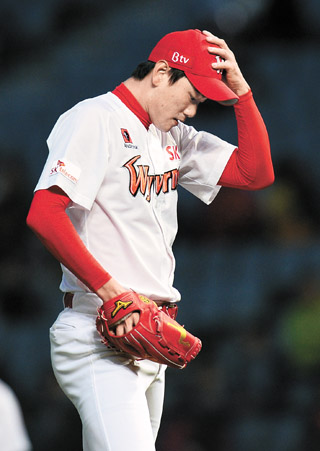 Kim Kwang-hyun, a left-handed pitcher for the SK Wyverns, has decided to stay in Korea despite hype about his possible departure to the United States. [NEWSIS]

Kim Kwang-hyun, an all-star pitcher in the Korean baseball league who has garnered attention from scouts in the United States and Japan, is staying put with his original club, the SK Wyverns.

The 28-year-old southpaw, considered one of the biggest names in this year’s free agent market, inked a four-year deal worth 8.5 billion won ($7.3 million) with the Incheon-based club. Kim will earn 5.3 billion won as a base salary after receiving 3.2 billion won as a signing bonus.
Kim’s potential throughout the season was evident, as scouts from the United States and Japan visited the SK Wyverns’ home base of Munhak Baseball Stadium to watch the lefty toss. With all the hype, Kim’s departure from Korea was considered a highly likely scenario.
Things got even more interesting when the Korea Baseball Organization reported that he had drawn interest from Major League Baseball. Earlier this month, American officials requested a status check on the pitcher, along with five other Korean players who became free agents this year.
The high demand meant that if Kim chose to stay in the Korean league, his value, according to analysts, could easily exceed 10 billion won for a four-year contract, which would have made him the most expensive free agent pitcher in the history of Korean baseball.
Ultimately, Kim did decide to stay with the team, where he started his career back in 2007. More surprising than his decision to stay, though, was the value of his contract. After he turned pro in 2007, Kim quickly became one of the top left-handed pitchers in the league, earning the MVP title in 2008 after the Wyverns won the Korean Series. 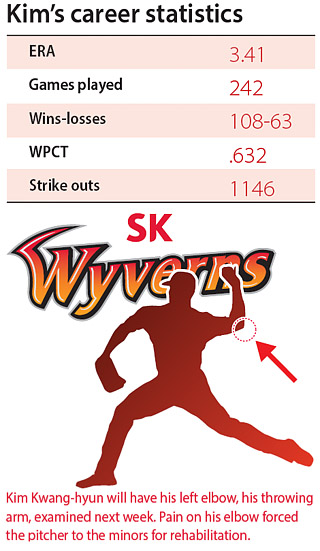 In 2014, he took a shot at the MLB through the posting system and eventually got into a contract negotiation with the San Diego Padres. The negotiations failed, but it was apparent that Kim had what it took to pitch in the big leagues.

All this added up to speculation that he might pocket a fat paycheck if he stayed home, which is why his under-10 billion won contract came as a surprise to many. Kim’s 8.5 billion-won deal is only the second biggest in the KBO after Yoon Suk-min, who signed a 9 billion won contract with the Kia Tigers in 2014 after coming from the Baltimore Orioles.

One possible explanation for the low price tag is the condition of his left elbow. Kim has plans to go to Japan in early December to undergo a detailed examination of his elbow. He might have to spend some time in rehab if he wants to be able to pitch next season in peak condition.

It’s possible that Kim might have been worried he would fail the medical test before finalizing a contract with another team. It’s certainly not rare in the MLB for a player to go through negotiations and then fail to make the team after a medical examination. In 2011, Chong Tae-hyon, an infielder from the Lotte Giants, managed to sign a two-year deal with the Orioles but failed the medical test.

During this year’s season, Kim was opted out of the first-team roster because of his elbow injury. After he returned, his fastball velocity dropped from over 150 kilometers an hour (90 miles per hour) to the upper-140 range.

The Wyverns knew Kim’s condition and exempted him from the medical test. One of the team officials at the negotiation table confirmed, “We knew his condition, so we didn’t have to conduct an extra medical test.”

Still, the Wyverns placed a bonus option on the contract. If Kim stays healthy and performs at peak level, the entire paycheck may well exceed 10 billion won.

The pitcher himself is optimistic about re-signing with his home team. “The incomparable sense of belonging and stability made me sign this contract,” Kim said. “I will work on my conditioning during the off-season and will return to the mound fully charged and ready to go.”