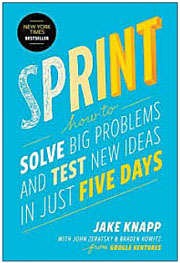 From three partners at Google Ventures, a unique five-day process for solving tough problems, proven at more than a hundred companies.

Entrepreneurs and leaders face big questions every day: What’s the most important place to focus your effort, and how do you start? What will your idea look like in real life? How many meetings and discussions does it take before you can be sure you have the right solution?

Now there’s a surefire way to answer these important questions: the sprint. Designer Jake Knapp created the five-day process at Google, where sprints were used on everything from Google Search to Google X. He joined Braden Kowitz and John Zeratsky at Google Ventures, and together they have completed more than a hundred sprints with companies in mobile, e-commerce, healthcare, finance, and more.

A practical guide to answering critical business questions, Sprint is a book for teams of any size, from small startups to Fortune 100s, from teachers to nonprofits.

It’s for anyone with a big opportunity, problem, or idea who needs to get answers today. 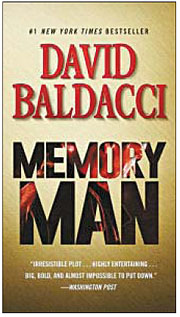 With over 110 million copies of his novels in print, David Baldacci is one of the most widely read storytellers in the world.

The first time was on the gridiron. A big, towering athlete, he was the only person from his hometown of Burlington ever to go pro. But his career ended before it had a chance to begin. On his very first play, a violent helmet-to-helmet collision knocked him off the field for good, and left him with an improbable side effect - he can never forget anything.

The second time was at home nearly two decades later. Now a police detective, Decker returned from a stakeout one evening and entered a nightmare - his wife, young daughter, and brother-in-law had been murdered.

His family destroyed, their killer’s identity as mysterious as the motive behind the crime, and unable to forget a single detail from that horrible night, Decker finds his world collapsing around him. He leaves the police force, loses his home, and winds up on the street, taking piecemeal jobs as a private investigator when he can.

But over a year later, a man turns himself in to the police and confesses to the murders. At the same time a horrific event nearly brings Burlington to its knees, and Decker is called back in to help with this investigation. Decker also seizes his chance to learn what really happened to his family that night. To uncover the stunning truth, he must use his remarkable gifts and confront the burdens that go along with them. He must endure the memories he would much rather forget. And he may have to make the ultimate sacrifice. 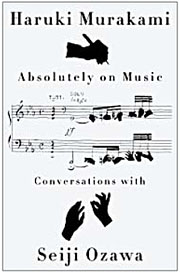 A deeply personal, intimate conversation about music and writing between the internationally acclaimed, best-selling author and his close friend, the former conductor of the Boston Symphony Orchestra.

Haruki Murakami’s passion for music runs deep. Before turning his hand to writing, he ran a jazz club in Tokyo, and from The Beatles’ “Norwegian Wood” to Franz Liszt’s “Years of Pilgrimage,” the aesthetic and emotional power of music permeates every one of his much-loved books. Now, in Absolutely on Music, Murakami fulfills a personal dream, sitting down with his friend, acclaimed conductor Seiji Ozawa, to talk, over a period of two years, about their shared interest. Transcribed from lengthy conversations about the nature of music and writing, here they discuss everything from Brahms to Beethoven, from Leonard Bernstein to Glenn Gould, from record collecting to pop-up orchestras, and much more. Ultimately this book gives readers an unprecedented glimpse into the minds of the two maestros.

It is essential reading for book and music lovers everywhere.