No easy way to keep jobs in U.S.

No easy way to keep jobs in U.S. 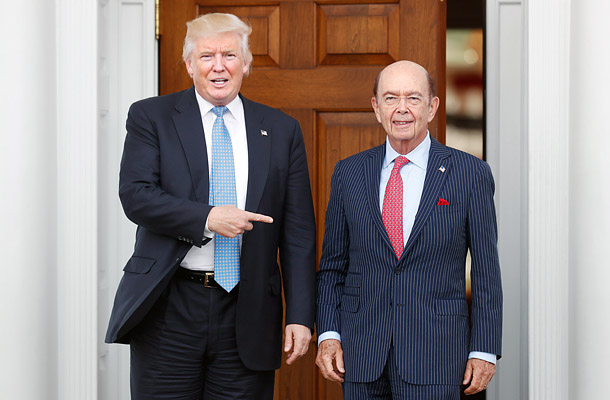 President-elect Donald Trump is poised to offer the position of commerce secretary to the head of a private-equity firm, Wilbur Ross. [AP/NEWSIS]

One of Donald Trump’s most consistent campaign promises has been to prevent U.S. businesses from moving good jobs to Mexico — whether through taxes, jawboning, or more drastic means, such as an outright prohibition. Economists might regard this as a misguided form of protectionism, but in fact, it’s worse than that: If instituted, it could prove a major step toward imposing capital controls on the American economy and politicizing many business decisions.

Let’s consider how such a policy would be enforced in practice.

When an American company “moves jobs to Mexico,” it doesn’t disassemble a factory and load all of the parts onto border-crossing trucks. That might be relatively easy to stop. Instead, the company closes or limits some U.S. production while expanding or initiating new production south of the border. Given that reality, how is government supposed to respond?

Using the law to forbid factory closures would have serious negative consequences. For one thing, those factories may be losing money and end up going bankrupt. For another, stopping the closure of old plants would lock the U.S. into earlier technologies and modes of production, limiting progress and economic advancement.

An alternative policy would prohibit companies from cutting American production and expanding in Mexico within, say, a two-year window. But would that be effective? If a law is needed, it presumably means that Mexican production is more profitable, at the margin, than U.S. production. So if American companies couldn’t shift production to Mexico, Mexican companies could expand production on their own. Or perhaps Mexico would look to non-American multinationals. The end result would be that Asian, European and Mexican investors would gain at the expense of U.S. companies.

American investors could also work around the law. If regulations prevented, say, Ford Motor Company from transferring its own capital funds to Mexico, what would keep it from using affiliates, subsidiaries, commercial alliances, or a complex web of foreign transfers to achieve more or less the same ends? The initial restrictions might prove as porous as the U.S. corporate income tax system.

Furthermore, if we limit the export of American capital to Mexico, the biggest winner would be China, as one of its most significant low-wage competitors — Mexico — suddenly would be hobbled.

Perhaps most importantly, a policy limiting the ability of American companies to move funds outside of the U.S. would create a dangerous new set of government powers. Imagine giving an administration the potential to rule whether a given transfer of funds would endanger job creation or job maintenance in the United States. That’s not exactly an objective standard, and so every capital transfer decision would be subject to the arbitrary diktats of politicians and bureaucrats. It’s not hard to imagine a Trump administration using such regulations to reward supportive businesses and to punish opponents. Companies wouldn’t know the rules of the game in advance, and they would be reluctant to speak out.

In other words, the Trump program for protectionism could go far beyond interference in international trade. It also could bring the kind of crony capitalist nightmare scenarios described by Ayn Rand in her novel “Atlas Shrugged,” a book many Republican legislators would be well advised to now read or reread.

The most optimistic scenario, if that’s the right way to put it, would be for Trump to have a few well-publicized communications with American business leaders, as he did with Ford, and simply state that he has saved American jobs by discouraging capital from leaving the country. On Thanksgiving, Trump claimed to be negotiating with Carrier Corporation to forestall plant closure and keep jobs in the United States. Expect a Trump victory, as the parent company of Carrier, United Technologies, is one of the nation’s largest military contractors. Bernie Sanders already has advised Trump to use these defense contracts as a means of leverage.

Continuing such public jawboning also would be an unfortunate form of politicizing the economy, but at least there wouldn’t be new laws or regulations to back it up in a systematic way.

The biggest irony of this whole Trump initiative is that it likely would lead to higher U.S. trade deficits. Economists stress the offsetting nature of trade flows and capital flows. As the accounting identities are constructed, a higher trade deficit corresponds to higher capital inflows, and a lower trade deficit corresponds to higher capital outflows. (To see the nature of these balanced transactions, imagine China selling goods and accumulating Treasury bills in return, a form of investment in this country.) So a Trumpian plan to limit capital outflows, through whatever means, is also — if only indirectly and without such intent — a plan to boost the trade deficit.