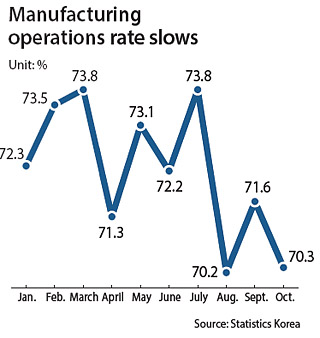 Amid the continuing political turmoil, more proof that the economy is slowing was released on Wednesday.

Korea’s industrial output shrunk for the second consecutive month and factory production fell to the lowest level since the Asian financial crisis in 1997-1998.

The manufacturing operation rate fell 1.3 percentage points to 70.3 percent in October from the previous month. That was the rate’s lowest level in 18 years, or since Oct. 1998, when it hit 69.8 percent, Statistics Korea said on Wednesday. That is the equivalent of only three out of 10 manufacturing plants operating last month.

Overall industrial output fell for the second consecutive month in October. It dropped 0.4 percent compared to the previous month. Industrial output in mining and manufacturing fell 1.7 percent in the period, while output in the services sector dropped 0.2 percent. Output for mining alone dropped 12.4 percent compared to the previous month, and the government said the main cause was the discontinuation of the Galaxy Note7 (in Korea, telecommunications-related products are statistically part of the mining sector). The fall in the services sector was blamed on railway strikes.

“The discontinuation of the Galaxy Note7 dragged down industrial output in the mining sector and the data shows that output in telecommunications-related products plummeted 18.1 percent from the previous month,” said Joo Hwan-wook, a director at the Ministry of Strategy and Finance. “The services sector also has weakened due to strikes in various industries, including that of transportation.“

According to the Finance Ministry, partial railway strikes entered their 65th consecutive day as of Wednesday, the longest rail strike ever. Transportation sector output dropped 2 percent compared to the previous month.

“The services sector, which has helped the economy grow in recent years, is expected to weaken from now on,” said Park Jung-woo, an economist at Korea Investment & Securities. “The government recently strengthened regulations on people taking out mortgages, which will eventually have a negative impact on the financial and real estate sectors. Retail, lodging and restaurant services will also likely slow due to the various political uncertainties.”

Domestic consumption rose 5.2 percent from the previous month. Sales of durable goods like automobiles rose 10.8 percent and semi-durable goods like clothes rose 3.2 percent. However, the government said the improvement in October was largely due to a promotional event, the Korea Sale Festa, and expressed concerns for the future.

“Domestic consumption in October improved due to the Korea Sale Festa and the base effect from September, which was when the figure dropped due to the Galaxy Note7 problem and as people bought fewer products related to the summer such as air conditioners when compared to August,” said Joo at the Finance Ministry.

“However, there are various uncertainties that the country now faces such as strikes, the ongoing corporate restructuring and weakened consumer sentiment.

“The government will closely monitor various factors so that uncertainties coming from the country and overseas don’t lead to a further weakening of consumer sentiment, while speeding up the execution of a financial stimulus packages including the supplementary budget.”

According to the Bank of Korea last week, the composite consumer sentiment index fell 6.1 points from the previous month to hit 95.8 in November, the lowest level since April 2009, which suggests the consumption figure for November will be worse than it was in October.

Ever since the beginning of last quarter, there have been rising questions as to whether the economy could meet its goal of 2.8 percent growth for the year even with the government’s supplementary budget, of which 80 percent has already been spent.

“We believe the Korean economy will grow 2 percent in the fourth quarter of this year and this will make the economic growth rate for the year 2.7 percent,” said Park at Korea Investment & Securities.

“There isn’t much room to boost the economy through monetary and fiscal policies at this moment, and one of the only positive sides to the economy is that Korea’s won is weakening due to the strengthened U.S. dollar.”

“It’s hard to say how much the supplementary budget will help the economy this year since its impact comes about six months after it is executed,” he said.

Park also said uncertainties about the Park Geun-hye administration’s survival and the incoming administration in the United States will have some effects on the national economy both later this year and throughout next year.

However, he argued that the upcoming elections in Europe will have a bigger impact.

“Only the positive sides to the Trump administration will stand out early next year since it will be the beginning of his presidency,” said Park.

“I believe risks coming from the upcoming presidential elections in Europe will be bigger since some countries might decide to leave the European Union like the United Kingdom did earlier this year after their elections.”