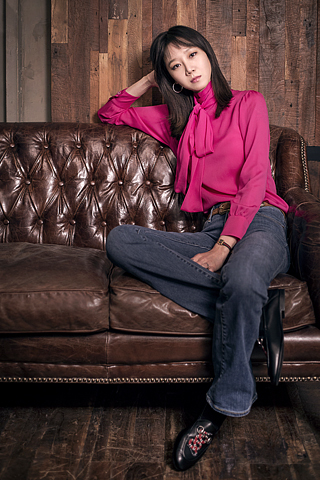 Actress Kong Hyo-jin broke out of her comfort zone for thriller “Missing,” and her trademark lovable girl-next-door is nowhere to be found. The 36-year-old said that she tends to make more brave decisions for roles on the silver screen. [MEGABOX PLUSM]

Actress Kong Hyo-jin has always played the lovable girl-next-door in some of Korea’s most popular romantic comedies.

Other times, the model-turned-actress has made headlines with her fashion.

However, the 36-year-old broke out of her comfort zone in the mystery thriller “Missing” playing a Chinese nanny, Han-mae, who kidnaps a child that she babysits.

As the mysterious character, whose identity turns out to be fake, the Kong that Koreans fell in love is nowhere to be found. As one mystery is solved after another, Han-mae is sometimes pitiful, other times cold and terrifying.

The JoongAng Ilbo, an affiliate of Korea JoongAng Daily, met with Kong recently for an interview. She noted, “Isn’t the lovely Hyo-jin kind of getting old?”

Kong recently starred in the SBS drama “Jealousy Incarnate,” where her character Pyo Na-ri, a weather caster, is involved in a tangled love triangle.

“I would understand if [with ‘Missing’] fans of the drama feel like they were forced to say goodbye to Pyo Na-ri,” she said.

She said she often chooses the character that will simply make viewers happy. “I am drawn to a female lead who makes people’s hearts pound and who emits so much positive spirit that when people watch a drama or movie that she’s in, their mundane life gets happier.”

But she added that she’s also struggling to find some new roles. And she said that she tends to be braver in choosing her roles for the silver screen.

In a way, her filmography shows just that: She has always played that lovely girl, but also often manages to redefine that character’s charm.

In the 2010 drama “Pasta,” which actually earned her the nickname “Kong-vley” (as in ‘the lovely Kong’), she was a bright girl who found love in the kitchen.

But in 2008’s “Crush and Blush” she plays an unpopular and not-so-pretty girl who has the strange habit of blushing badly. And in the 2011 “Love Fiction” she is a hopeless romantic who is looking for a guy to love her everything, including her armpit hair.

“Of course, I have had hesitations,” she said. “For ‘Crush and Blush,’ for instance, I tried to reject [the role] but I felt like that character was hanging on to me. It’s the same with ‘Missing.’ Although my part was small and I had to speak Chinese, the script was so good and I just couldn’t get it out of my head. What can you do? Your heart wants what it wants.”

She said she didn’t define what Han-mae is like and just went with each scene. “I approached each scene with different emotions,” she said. “I think that’s why sometimes she seems so innocent and other times she looks crazy.”

In fact, the script had various versions as to who Han-mae is. One had her as a so-called Joseonjok, or ethnic Koreans who grew up or still resides in China. Another had her as a foreign immigrant. Director E.oni also thought about casting a Chinese actress or a complete newbie for the role.

However, the director went ahead with Kong because she wanted to see her play Han-mae.

“I told [the director] that I would do what I can but if it doesn’t work out I wouldn’t mind resorting to dubbing,” she said. “There are many Chinese helpers in Korea but we don’t really take an interest in who they really are. It must be so lonely for them, don’t you think? When we want to tell the story of an alienated person, I thought to myself, we should do all we can.”