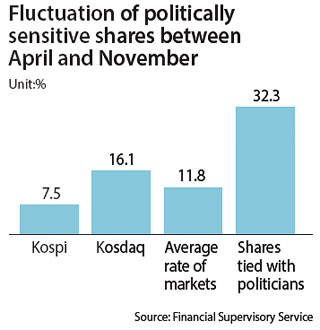 The country’s financial watchdog has vowed to more closely scrutinize stocks of companies connected with politicians - especially potential presidential candidates - as their shares have shown heavy fluctuation ahead of next year’s presidential election.

The Financial Supervisory Service said Wednesday that 60 shares listed on the main bourse Kospi and tech-heavy Kosdaq displayed an average fluctuation rate of 32.3 percent between April and November.

The Financial Supervisory Service, though, refrained from identifying the 60 stocks it intends to monitor.

“After the legislative election in April [this year], stock related to political figures went astray from the market trends of the Kospi and Kosdaq and have displayed abnormal trends,” the watchdog said.

Korea’s presidential election is set for December 2017, though it may come sooner if President Park Geun-hye leaves office early due to a massive influence-peddling scandal.

“With the presidential election coming up next year, the volatility of politically sensitive shares will likely accelerate,” the Financial Supervisory Service said.

The watchdog said the tendency of politically-tied companies being out of touch with usual market trends exacerbated in August as shares moved along with political issues.

And now, as the fate of Park Geun-hye’s administration hangs in the balance, shares linked to opposition politicians have received a boost.

The share price of DSR Wire, a rope manufacturer with reported ties to Moon Jae-in, a potential presidential candidate for the opposition Minjoo Party, doubled this month to around 10,000 won ($8.50) from 6,000 won in October.

DSR Wire closed Wednesday at 10,300 won, down 1.44 percent from the previous trading day.

The Financial Supervisory Service said it would strengthen monitoring of internet forums, social media platforms and other websites to contain the spread of false rumors that could negatively disrupt the market.

The agency has also designated December, January and February as a special period to encourage people to report cases of attempts to distort the markets.

Financial authorities warned investors to be wary of steep rises in stock value that are not based on market fundamentals, as the shares could be vulnerable to unexpected political crises.

The Korea Exchange, operator of the country’s markets, had issued a similar warning about such stocks back in August.