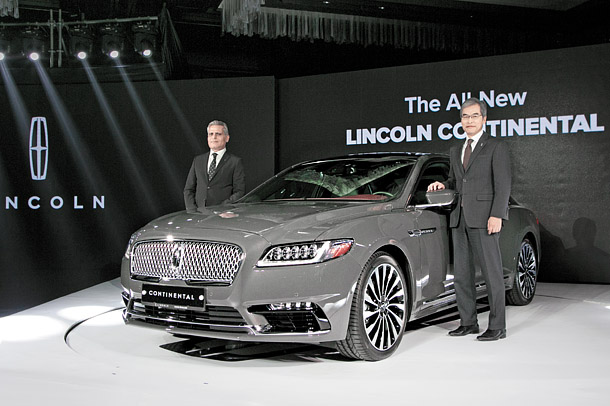 Kumar Galhotra, president of Lincoln Motor Company, left, with Ford Korea CEO Jung Jae-hee at a launch event for the new Lincoln Continental in central Seoul on Wednesday, 14 years after the luxury flagship sedan was discontinued in Korea in 2002. The 100-year-old automaker struggled to compete with other global manufacturers in the 1990s, when a financial crisis in the country led consumers to seek lower-cost vehicles.

Lincoln is reintroducing the model into the Korean market, combining its legacy features with the latest technology. The new Continental features a 3.0 V6 GTDI engine with 393 horsepower and an E-latch door that opens and closes with the push of a button. The price starts at 82.5 million won ($70,390). [FORD KOREA]