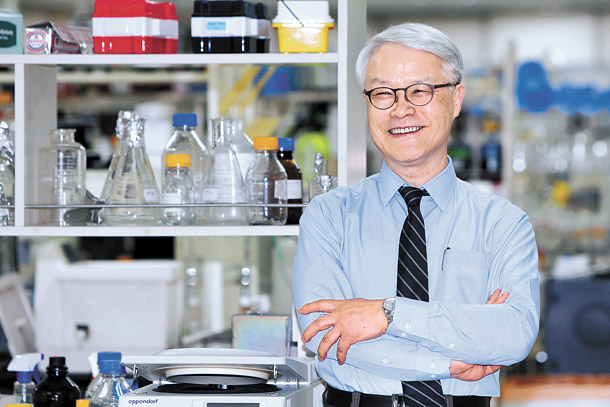 After years of research and development, CrystalGenomics has had a breakthrough in drug development, and the company’s president, Cho Joong-myung, is pleased. The pharmaceuticals company has been developing medicine since its founding in July 2000, relying on venture capital investments and government funding to stay afloat.

Even the money that the company earned for listing on the secondary Kosdaq market was used to develop drugs. “We’ve poured something like 120 billion won ($103 million) into the company, and now we can’t mess it up even if we want to,” Cho said with a hearty laugh. The president said he is relieved the company is beginning to reap what it has sown.

The company landed a 14.5 billion won contract with a Turkish pharmaceutical company, TR Pharm, in January. CrystalGenomics developed its arthritis treatment Acelex last year, the 22nd medicine by a domestic company. The company is seeking to export it to China.

In June, the company paved the way to exporting medicinal development technology to U.S. bio companies. Aptose Biosciences agreed to pay 353 billion won for the recipe of CG 026806, a treatment for acute leukemia. The contract with the U.S. company has given CrystalGenomics 10.7 billion won in sales in the first half of this year, and a profit of 159.25 million won. This is the first time the company has seen any profit. “We’ve just taken the first steps,” said Cho, “and we’ll keep investing our profit into developing new medicine, except for the crucial expenses.”

Cho started out as a researcher at LG Chemistry’s Biotech lab, currently LG Life Sciences. Having studied zoology at Seoul National University, Cho went on to obtain a doctorate degree in biochemistry at the University of Houston and returned to Korea in 1996 to work for LG Chem. With annual funding of 45 billion won, Cho conducted research for the conglomerate with a comfortable salary. But he wanted more. He wanted a life in which he could create his own innovative medicine, instead of doing only the research the company requested. That’s why he and 10 other researchers from the lab independently set up CrystalGenomics.

When Cho first left LG Chem to build his own company, he was certain he would be successful. Cho’s confidence in his technological skills was solid, and proved to be just. In 2003, the research team at CrystalGenomics became the first in the world to figure out the secret behind how Viagra works and made the cover of the Nature, a prestigious science journal. When the company sought to be listed on the Japanese stock exchange to raise funds, the Korea Stock Exchange devised a new set of rules to help list it on the secondary Kosdaq market. Thus in 2006, Crystal Genomics became the first bio venture company to be listed on the Kosdaq-based technology assessment system.

The firm had always been known for its skillfulness, but its performance had dragged it down. Unable to gain any profit until this year, some people called Cho “the boy who cried wolf,” as the company failed to show results on the drugs it claimed it was close to developing. Cho didn’t budge, though; he carried on with his research for 16 years, waiting for the buds of his effort to bloom. When in doubt, Cho took solace in the tale of Gilead Sciences. After being in the red for 20 years, the U.S. company managed to become one of the world’s top 10 pharmaceutical developers.

Cho’s plan for the next year is to win export contracts for two new medicines; an anticancer drug that acts on specific cancer molecules and an antibiotic that kills super bacteria.

“This year, we’ve started to see some actual progress in the research and development we have made,” said Cho. “We would like to stay a model bioventure company for drug development in Korea.”