Lotte scion pushes for reform amid the scandals

Lotte scion pushes for reform amid the scandals 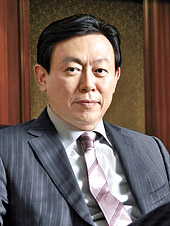 The chairman of Lotte Group made calls for corporate reform during a meeting with the conglomerate’s presidents on Wednesday but refused to comment on allegations that the company contributed money to the slush fund of President Park Geun-hye’s scandal-ridden confidante.

Shin Dong-bin met with around 80 senior executives at Lotte World Mall in Jamsil-dong, southeastern Seoul, and discussed ongoing issues related to management and expectations for next year.

“Lotte Group has received a lot of criticism from the public and media, and I believe we need to make large changes for us to leap forward once again,” Shin said. “We emphasize the need for change in order to keep our promise of taking full responsibility for causing troubles and to be a company that will take responsibility as a member of society. Our group does not have a future unless we make changes now.”

Shin added that next year marks Lotte Group’s 50th anniversary, and mentioned the need to bolster itself against Korea’s slow economy, protectionist American trade policy and a weakening Chinese economy.

“Next year marks the 50th anniversary of Lotte, and we should do our best to find new growth engine for the group,” Shin said. “Let us learn from our 50 years of experience to create a company no one can catch up to.”

Local media outlets reported that Lotte representatives did not mention a word about the ongoing political scandal that has engulfed President Park and the company. Prosecutors are digging into whether the president’s longtime friend, Choi Soon-sil, received money from Lotte Group for a slush fund.

That’s on top of another investigation that began earlier this year and has yet to wrap up involving allegations that Lotte created slush funds within the company through its affiliates. Prosecutors are looking into where and to whom the money went.