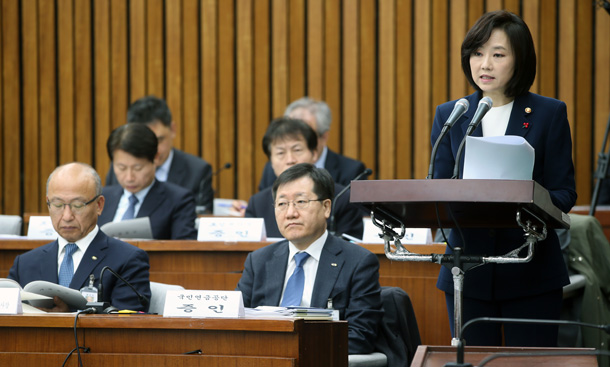 Culture Minister Cho Yoon-sun, right, gives a briefing on ministerial projects linked to presidential friend Choi Soon-sil and her aides to lawmakers in the National Assembly as the parliamentary investigation into Choi-gate kicked off on Wednesday. [PARK JONG-KEUN]

A parliamentary probe into an influence-peddling and abuse of power scandal threatening the survival of the Park Geun-hye government kicked off Wednesday with lawmakers on both sides of the aisle intent on exposing secret connections linking the president with her controversial friend Choi Soon-sil.

At the first hearing of the probe at the National Assembly, five government bodies including the Culture Ministry, Justice Ministry and the National Pension Service were questioned over their role in Choi’s alleged meddling in state affairs and extortion of tens of millions of dollars from big companies.

The parliamentary probe is separate from an independent counsel investigation that began Wednesday, and which has inherited an earlier prosecution probe.

The Culture Ministry is accused of helping Choi create two nonprofit foundations that amassed 77.4 billion won ($66.1 million) in donations from conglomerates and doling out various business favors that ended up enriching her family.

The Justice Ministry was hammered for dragging its feet in investigating the so-called Choi-gate scandal at an early phase, possibly because it involved the president and her inner circle.

“The prosecution wasted the first month of its investigation doing nothing. It gave the suspects enough time to destroy evidence,” snapped Rep. Park Beom-kye of the Minjoo Party during his questioning of Justice Vice Minister Lee Chang-jae, who was filling in for former Justice Minister Kim Hyun-woong, who stepped down Tuesday.

Minjoo lawmaker Park Young-sun lashed out at the prosecution and Justice Ministry for not stipulating President Park’s alleged collusion with Choi in a number of schemes in their report to parliament ahead of the hearing.

“In its indictment, the Seoul Central Prosecutors’ Office made it clear President Park was an accomplice of Choi. Why did the report submitted to the Assembly omit that part?” asked the journalist-turned-lawmaker.

Rep. Ha Tae-keung of the ruling Saenuri Party demanded vice minister Kim make public recordings of conversations between President Park and her former aid Jeong Ho-seong that were obtained and scrutinized by the prosecution. Those recordings are said to contain conversations in which Park ordered her former aide to deliver classified information to Choi. If true and made public, those recordings could deal another serious blow to the legitimacy of the Park administration.

Vice minister Kim refused to submit the recordings to the probe, citing the ongoing investigation and upcoming trials.

In its report to the parliamentary probe, the Justice Ministry named former presidential chief of staff Kim Ki-choon as a suspect in the abuse of power case. In the report, prosecutors said the 77-year-old Kim is being investigated for abuse of power for ordering then-vice culture minister Kim Chong to dismiss six first-grade senior ministry officials in October 2014. Prosecutors also named former presidential secretary for civil affairs Woo Byung-woo as a suspect for dereliction of duty for failing to detect Choi’s abuse of power behind the scenes.

The probe will hold its second hearing next Tuesday with big business group owners being summoned for questioning.

Choi Soon-sil will be summoned for questioning the next day, Dec. 7.