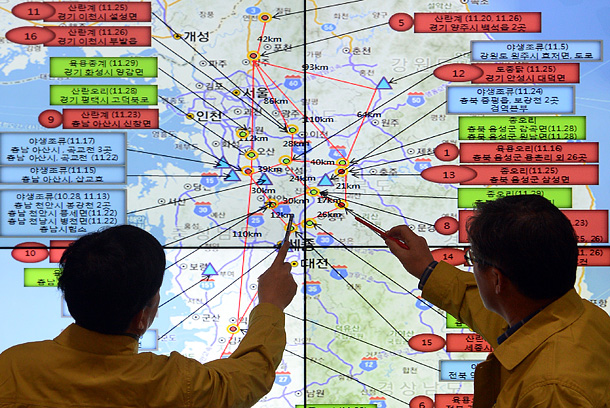 Officials from the agriculture ministry check avian influenza outbreaks on a monitoring map in the Sejong Government Complex on Wednesday. [NEWSIS]

The strain of avian influenza spreading across the nation has less chance of infecting humans compared to outbreaks in China in which 15 people were infected and nine died since 2014, according to the National Research Institute of Health and Korea Centers for Disease Control and Prevention (KCDC) Wednesday.

The study results also revealed that there is a low chance that tolerance to vaccines against avian influenza will be formed in such a strain.

The KCDC announced Wednesday it will carry out artificial infection experiments to evaluate health risks associated with the avian flu, which will be completed in March.

As of now, a total of 1,549 individuals, mostly owners of affected farms, are at the highest risk of infection. Local health authorities will monitor them during the 10-day incubation period.

On Sunday, farmers in Icheon and Anseong, Gyeonggi reported sudden deaths of chickens. Some 386,000 chickens on three affected farms were culled as a precaution.

According to local health authorities, migratory birds have likely spread the virus in Anseong, while movement of vehicles is suspected to be the cause of the infection in Icheon. An egg truck was found to have stopped at a farm in Pocheon, Gyeonggi, prior to a visit to a farm in Icheon.

This is the first time that Korea has reported an outbreak of the H5N6 avian influenza virus. The strain of the virus was first discovered on Oct. 28 in the feces of migratory birds in Cheonan, South Chungcheong.

In an all-out effort to contain the spread of the virus, the government has imposed a movement ban on poultry farmers and their vehicles within a 10-kilometer radius of sites where the virus has tested positive and set up sterilizing posts within a 3-kilometer radius.

An official from the Gyeonggi government said, “In order to prevent the further spread of the H5N6 strain, farmers in the affected areas need to sterilize and refrain from traveling.”

Despite quarantine measures to contain the outbreak, the influenza continues to spread rapidly.