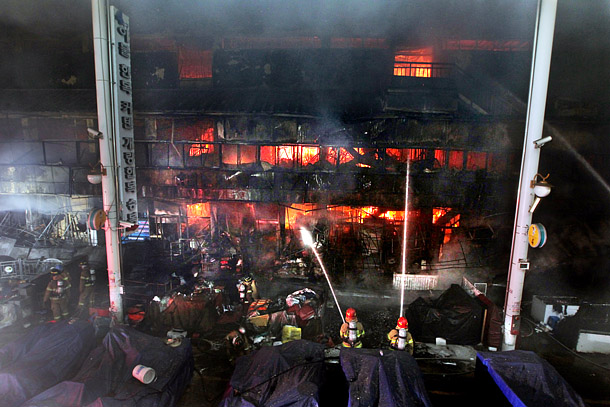 Firefighters shoot water to put out a fire engulfing hundreds of shops in Seomun Market, the largest traditional street market in Daegu, on Wednesday. Daegu police said the fire broke out around 2 a.m. early Wednesday morning at a street stall located between Buildings 1 and 4. As of Wednesday afternoon, some 97 fire engines and 400 firefighters were still battling the fire. [GONG JEONG-SIK]

Fire tore through Seomun Market, the largest traditional street market in Daegu, on Wednesday and ravaged Building 4, the largest building in the market, according to local officials. The cause of the disaster is yet to be discovered.

Daegu police said a street stall located between Buildings 1 and 4 caught fire at 2:08 a.m. on Wednesday, which then raced through Building 4, home to fabric shops.

A night guard at the market said, “I came outside for a walk around 2 a.m. and noticed the building’s first floor bursting into flame.”

At least 700 shops out of 839 and 10 street stalls outside the buildings were burnt down.

Since the fire broke out when stores were closed, no casualties were reported, but two firefighters were injured slightly.

The amount of damage to property and inventories has not been calculated. As of Wednesday afternoon, some 97 fire engines and 400 firefighters were still extinguishing the fire.

Two fire fighters standing on a staircase inside the building were injured when a part of the building collapsed. They were taken to a nearby hospital for treatment.

In December 2005, fire caused by an electrical fault turned Building 2 in Seomun Market into an inferno.

According to the Jung District Office of Daegu, the property damage at the time amounted to roughly 689 billion won ($589.2 million). The disaster Wednesday appeared to be similar to 2005.

Many business owners had big inventories to prepare for sales at the end of the year.

Most shops in Seomun Market are covered by a collective insurance policy worth 7.8 billion won. But not all are insured against fire after their monthly premiums increased significantly after the fire in 2005. Some vendors dropped their fire insurance.