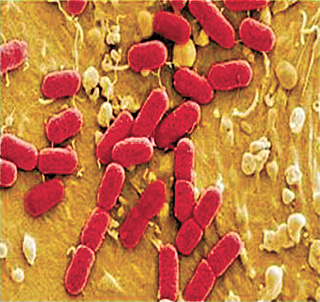 The Korea Centers for Disease Control and Prevention (KCDC) on Wednesday confirmed the presence in Korea of a superbug gene resistant to powerful last-resort antibiotics.

Since 2011, the KCDC collected intestinal bacteria from domestic hospitals and tested 9,300 samples, during which they found three cases of Mobile Colistin Resistance-1 (MCR-1) gene.

The MCR-1 gene makes bacteria resistant to the powerful antibiotics colistin and carbapenem, which are used as last-resort drugs to treat patients with multi-drug-resistant infections. It is said to be a mutant of the carbapenem-resistant enterobacteriaceae, or CRE, dubbed the “nightmare bacteria.”

CRE can kill up to 50 percent of patients who become infected, according to the U.S. Centers for Disease Control and Prevention, which has stressed that the superbug is one of the most urgent public health threats.

The United States saw its first case of MCR-1 in a 49-year-old Pennsylvania woman in May who was carrying a strain of E. coli resistant to a wide range of drugs. There are few known treatments for MCR-1, which was first discovered by Chinese researchers at the end of last year.

Park Chan, an official with the KCDC overseeing drug tolerance, said, “The only cure method is to use a lot of different types of antibiotics, but the superbug may or may not be killed through this method.”

He continued, “We do not know much about the characteristics of this bacteria, so we need to be cautious because if we use too much carbapenem-type antibiotics, it may develop further resistance, mutate and spread.”

The plasmid-mediated colistin-resistant MCR-1 gene was first found in enterobacteriaceae from humans, pigs and raw retail meat in China in November 2015. The superbug has also been discovered in people, animals or meat in over 20 countries across the world in the United States, Europe, Canada and Africa.

Colistin is not actually used in animals in the United States but is used in livestock in China.

Antimicrobial resistance (AMR) has the potential to kill as many as 10 million people a year, according to a recent review by the United Kingdom, and cost the world economy as much as $100 trillion annually. The World Health Organization points out that antibiotic resistance is present in every country and can put anyone at risk.

The KCDC said it is planning to monitor antibiotic-resistant bacteria under its “One Health” project.