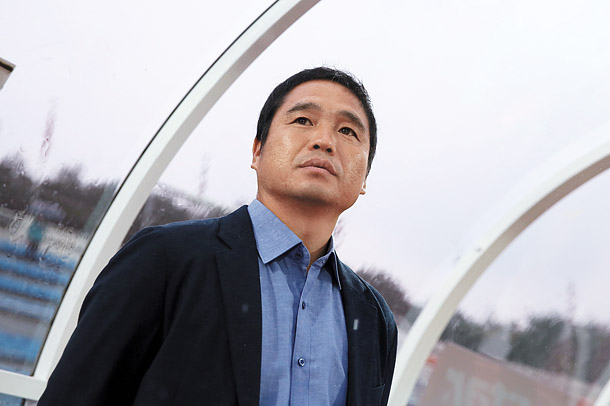 Cho Jin-ho, manager of Sangju Sangmu FC last season, is taking the helm of Busan IPark. He hopes to help Busan earn a promotion to the top-tier K-League Classic. [K-LEAGUE]

There was a bit of surprise last week when Cho Jin-ho, most recently the manager of the top-tier K-League Classic team Sangju Sangmu FC, announced he would take step down to take the helm of the struggling second-tier K-League Challenge team Busan IPark FC.

But the 43-year-old manager has never been one to back down from daunting challenges. “People asked how much money they offered me,” he told Ilgan Sports, an affiliate of the Korea JoongAng Daily, during an interview over the weekend. “But the reason I said yes when they asked me was because of the potential the team holds.”

Busan made the official announcement last Friday that they had signed a contract with Cho. The former midfielder had enough coaching experience under his belt to pique Busan’s interest. Throughout his managerial career, Cho has either coached or managed four different K-League teams, including Daejeon Citizen and Sangju Sangmu FC, the football team of the Korea Armed Forces Athletic Corps.

Under Cho’s watch, Daejeon was promoted from the Challenge to the Classic, and Sangju, during their first year back in the top-tier Classic, finished sixth in the league this season. It was first time the military team finished in the upper ranks of the Classic.

All the more shocking, then, that Cho decided to join a Challenge team instead of stay in the Classic, especially after such a successful stint with Sangju this year. “I knew Sangju expected some decent talent coming in next year,” he said. “I slept on it for a while, but in the end, I knew I did everything I could as a boss, putting Sangju in the upper ranks of the Classic.

“Above all else, I wanted to take another crack at bringing a Challenge team up to the Classic.”

It’s not going to be easy. In this year’s Challenge, Busan finished fifth in the standings with 19 wins, seven draws and 15 losses. Although they were qualified for the promotion playoffs, Gangwon FC, who eventually clinched the promotion to the Classic after the playoffs, stood in their way. Cho knew the risk he was taking on by moving down to Busan.

“I know I might fail,” he explained. “I mean, we have to top the league to earn the promotion. But I am not afraid. Everyone fails, right? Instead of settling for the status quo, I wanted some excitement in my life, no matter how hard people say it will be. And even if I stayed with Sangju, there is no guarantee I will be able to repeat what I did this year. There is always pressure and risk factors no matter where I go.

“I am going to pour everything I have into rearing Busan into a great team.”

Cho plans to turn Busan into an offensive-centered team. “If the opponent has two goals, we’ll reciprocate with three goals,” he said. “Watching the opening match of this year’s Korea FA Cup between the Suwon Samsung Bluewings and FC Seoul, it was exhilarating. And that’s what I will do with Busan. Even if we lose, I want fans to come out thinking they just saw an exciting match. That’s also what enabled Daejeon to earn a promotion. But of course, we won’t play a lax defense either.”

After Busan were relegated to the Challenge in 2015, their roster thinned drastically. For Cho, one of his most urgent tasks at hand is to build it back up to a competitive level.

“I can provide players with a big picture of where we will go and lead them in that direction,” Cho said. “But it’s the players who will actually play in the games. I had a great time coaching Lim Sang-hyub in Sangju, and I am going to ask the club to keep him here [in Busan]. We also need strikers like Carlos Adriano [of FC Seoul]. I have to be on the lookout for such a talent.”

When asked what he hopes to accomplish in 10 years, the skipper said, “I watched the Asian Champions League finals on television. I know what Choi Kang-hee had to go through in the past 10 years to put Jeonbuk Hyundai Motors at the top. And then it hit me that I want to make Busan like Jeonbuk in 10 years. Some may say I hope to land a job with the national team, but no. Right now, I want to make Busan an elite club that represents the K-League.”