For Koreans in Europe, it’s stay or leave

For Koreans in Europe, it’s stay or leave 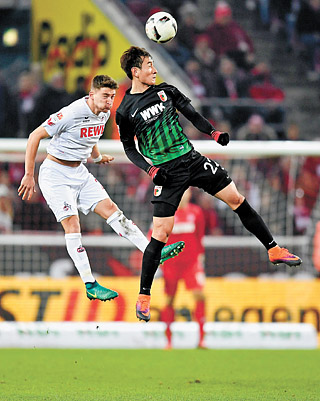 Korean forward Ji Dong-won of the Bundesliga’s FC Augsburg, right, battles for the ball during a German league match against FC Cologne last week. Although a regular starting forward, Ji has netted only two goals this season for his team. [AP/NEWSIS]

While it might not be so rare these days to find a Korean footballer in European leagues, it certainly is rare to hear any good news from them.

And while some might say no news is good news, for Korean forwards like Ji Dong-won of the Bundesliga’s FC Augsburg, no news means no notable performance to speak of. Along with Ji, the fate of many Koreans in Europe’s football leagues might be hanging in the balance when the transfer window period comes around in January.

Many of them will want to stay in Europe as long as possible, especially since it wasn’t easy for them to get there in the first place. Yun Suk-young is the quintessential case of a Korean footballer who has yet to find a strong footing in Europe.

After leaving the Jeonnam Dragons of the K-League in 2012, Yun became somewhat of a nomad, getting loaned out to different clubs in Europe, including the Doncaster Rovers and Charlton Athletic, while playing with the Queens Park Rangers in the Championship, the second-tier league in English football.

The left back recently joined Brøndby IF of the Danish Superliga in September, but even after he settled in with the team, he rarely found himself on the pitch. It wasn’t until Oct. 27 that Yun finally made his debut with the new club.

Park Joo-ho, a 29-year-old midfielder for Borussia Dortmund in Germany’s Bundesliga, has also found himself on the bench more often than not. When he was with Mainz 05, Park was a regular starter. But his standing in the German league saw a drastic fall when he moved to Dortmund last year. Last season, he played only in five league games, and this year, he registered only 65 minutes of playing time in just two games.

Kim Jin-Su, a left back for the Bundesliga’s TSG 1899 Hoffenheim, is in a worse situation. The last time he saw any playing time was on Jan. 31 in a match against Bayern Munich. For 27 games now, Kim hasn’t been able to leave the bench.

Ji of Augsburg shares similar sentiments with his compatriots in Bundesliga, though his concern does not stem from lack of playing time. Ji is in fact a regular starter for his team, often assuming the position up top as a striker.

But although he is a forward, his record isn’t reflective of the assignment. Playing in 14 games for Augsburg this year, Ji has netted only two goals. For this reason, every time he has been called up to play in Korea’s national team, some question whether he is suitable for the job.

For Ji’s teammate Koo Ja-cheol, it is not a slump that’s hurting his performance but an injury.

The same goes for Ki Sung-yueng of Swansea City in the English Premier League. After he hurt his toe, Ki was forced to step aside and make room for others on the team to take his position in the starting lineup. But after Swansea saw a managerial change, Ki started to get more chances to play.

Since then, he’s been steadily raising his standing in the team as a starting midfielder. This was a good news for Uli Stielike, the manager of Korean national football team, since Ki assumes the role of playmaker in the national team.

“Things started to turn for the better, and I began to get more chances,” Ki said. “It’s disappointing being forced to sit out.”

Lee Chung-yong of Crystal Palace may also have to see where his fate takes him when the transfer window opens in January.

Once deemed a rising star to watch in football by The Times, Lee has been in a scuffle with his team’s manager Alan Pardew, who blamed Lee for their loss against Manchester City last month. “I got angry when Lee had not delivered my instructions during a match with Manchester City on Sunday [Nov. 23],” the coach said.