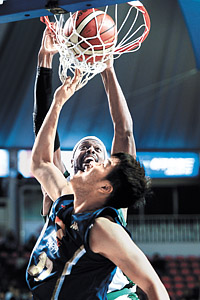 The Jeonju KCC Egis will be looking for revenge when they face the Wonju Dongbu Promy on the road.

During their first match in October, the Egis lost to the Promy by 10 points. The Promy, led by Rod Benson who netted 22 points, scored a combined total of 94 points. Although the Egis’ Andre Emmett managed to match Benson’s performance by putting 22 points on the board, the Egis were unable to cut their deficit.

Meanwhile, the Egis will have to make do without their star player Emmett, who is still recovering from a groin injury. 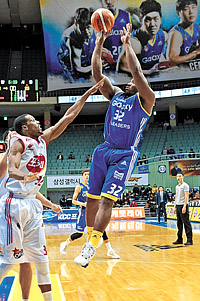 It might be a tad bit early to be talking about the championships of the Korean Basketball League, but we could be getting a taste of what the finals might look like as two of this season’s top teams face off on Sunday.

The Seoul Samsung Thunders will travel north of the capital to face last season’s champions, the Goyang Orion Orions. This will be their second match of the season.

In their last game about a month ago, the Thunders ruled the court despite the Orions scoring over 100 points. The Thunders bested them by three points, winning the match with 107 points on the board, nearly 20 more than their season average of 89.

The Orions will be looking to make up for their loss. With basketball season in its second month, some new additions to their roster, including American guard O’Darien Bassett, are looking more comfortable with their teammates. Compared to the Thunders, who have another match the day before, the Orions will be more rested after getting some time off from their game today. 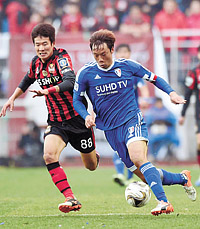 This year’s nail-biting Korean FA Cup concludes on Saturday, with the Suwon Samsung Bluewings visiting their old rival in the capital.

During the opening match last week, Suwon took the first win against FC Seoul in this year’s FA Cup finals. As one of Korean football’s biggest rivalries, tomorrow’s match looks to be just as competitive, if not more, than the first-leg match.

Suwon is going into the game with a 2-1 lead in the final series. Seoul, meanwhile, is going in without their complete starting roster. Their goalie Yoo Hyun was also suspended after he slapped Lee Jong-sung of Suwon in the second half of Sunday’s match. The referees didn’t catch him in action, but the Korea Football Association decided to mete out penalties after watching a postgame video.

Aside from Yoo, the forward trio of Park Chu-yong, Carlos Adriano and Dejan Damjanovic will be incomplete.

Damjavonic has to stay on the bench due to a yellow card he received in the last match, and Park is still recovering from an injury that sidelined him on Sunday.