Toward an honorable exit

Toward an honorable exit 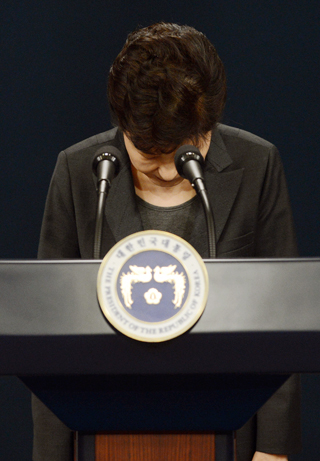 President Park Geun-hye makes her third apology for the abuse of power scandal involving the president and her longtime friend Choi Soon-sil at the Blue House on Nov. 29. [KIM SEONG RYONG]

Richard Nixon was a diligent politician who did his best. He became the Vice President of the United States at 40 because he had a good reputation within his party. But he was always a bit gloomy and anxious and did not socialize much. Nixon was a brilliant student, he had attended Whittier College in his hometown because his family was poor. Later, he attended Duke University School of Law, but there, he had no presence.

I had a chance to research American presidents, including Nixon, for one year at Duke about 10 years ago, and I was curious. Unlike other universities that produced U.S. presidents, Duke University had no memorial or building named after Nixon or provided a brochure about him. I asked older professors about the lack of Nixon’s legacy, and they said that the university is ashamed that Nixon was an alumnus. Some even said that his name was removed from the list of alumni.

Around that time, I visited Park Geun-hye’s residence in Samseong-dong in southern Seoul. She was a National Assembly member at the time. The house was gloomy and dark, filled with photographs and keepsakes of Park Chung-hee and Yuk Young-soo. It was more of a Park Chung-hee memorial than a happy home. It remained stuck in the 1970s, and Park Geun-hye must have spent a lot of time thinking about her father.

While Park Geun-hye’s childhood was just the opposite of Nixon’s, it is hard to find any recollection of happy moments in her book or interviews after she came of age. In Park’s diary, “If I was Born to an Ordinary Family,” she wrote, “If I put worthiness and pains on a scale, worthiness cannot offset pains.”

In fact, the Watergate scandal itself was not extremely serious. What fanned Americans’ fury was how the president intervened in the investigation and attempted to cover up the incident. For two years after the break-in at the Democratic National Committee headquarters at the Watergate complex, Nixon did everything: obstruction, persuasion, concealment, reshuffle, denial and lies. In the end, he resigned in exchange for the promise of a pardon. In the process, he became unarguably the worst president of the United States.

The value of a person is better exposed not at the entrance but at the exit. Nixon denied, refused, lied and resisted to save the remainder of his doomed career and even his alma mater turned their back on him. Of course, Nixon remained composed on the surface. But he cried out to those close to him that he didn’t understand what he had done wrong.

The first half of Park Geun-hye’s third statement was filled with her continued claims of innocence, and I wonder why she is following the failure of the Watergate scandal. She can learn a lot from the failure of Nixon, with whom she shares so much, as she is about to be impeached. When she said she has “given up everything,” we did not feel her sincerity. Instead, she seemed to have complicated calculations.

It is hard to be moved by the statement filled with calculated remarks and self-justification. Seventy-three percent of citizens said they were unsatisfied with her statement. Foreign media said that she “pretended” to resign. While Park nearly cried and made an emotional appeal, the third statement was not much different from the two previous ones as she still hasn’t let go of the greed for power. She said she never pursued personal interest for a moment. If so, it is unclear why she will end her term early.

Politics in Korea is harder to get out than in. Park is the very person who personally experienced the unfortunate past. More than 10 years ago, I remember Park saying at her residence, “I want to be a politician to whom people would hand me a bowl of soup when I meet them while traveling after I retire.” She still has some time left. It can only be possible if she has her “mind set only for the nation and the people,” as she said in the apology.