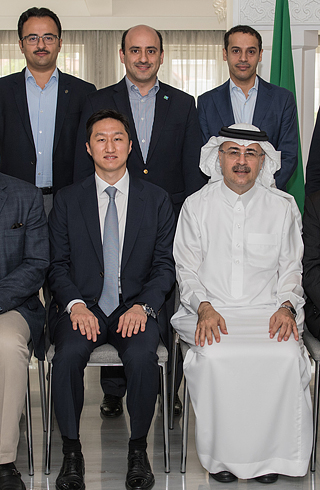 Amin al-Nasser, Saudi Aramco CEO, right, sits next to Chung Ki-sun, Hyundai Heavy Industries’ executive vice president, in Saudi Arabia on Wednesday. The Korean shipbuilder and the Saudi state-owned oil energy company signed an agreement to build a joint shipbuilding plant in Ras Al-Khair on the eastern coast of Saudi Arabia. An investment of 5 trillion won ($4.2 billion) will be made on the construction of the shipbuilding plant named after King Salman bin Abdulaziz Al Saud. It is scheduled to be completed in 2021. [HYUNDAI HEAVY INDUSTRIES]