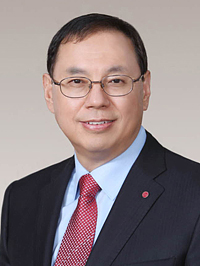 Jo Seong-jin, head of home appliances and air solutions at LG Electronics, has been promoted to vice chairman and CEO for his outstanding output amid uncertainties in the management environment at home and abroad in recent years.

His responsibility will extend across all of LG’s business units including the H&A unit, mobile communications, home entertainment as well as vehicle components and oversight of more than 120 operations around the world, LG said Thursday.

The 60-year-old, legendary within LG, was named appliance chief in 2013 for helping propel LG’s global standing. He joined LG in 1976 after graduating from Yongsan Technical High School in central Seoul.

The home appliance unit posted a 9 percent operating profit in the first and second quarters. Jo is also noted for launching the successful Signature luxury brand of TVs and refrigerators.

His promotion is part of the year-end executive-level reshuffle at LG, the second-largest consumer electronics firm in Korea after Samsung. The announcement followed a board of director’s meeting at LG on Thursday and will take effect Jan. 1 after the general shareholders’ meeting.

LG promoted 58 executives this year, up from 38 last year, the biggest scale since 2005, as it seeks to transform into a “young and flexible” organization, the company said.

LG Group Vice Chairman and CEO Koo Bon-joon, who is the younger brother of Chairman Koo Bon-moo, will assume a more active role in developing new business opportunities. It’s accepted by insiders as a signal the vice chairman will be serving as a bridgehead for the ownership succession of the chairman’s son and heir-apparent Koo Kwang-mo, a 38-year-old managing director at LG Corporation.

LG Electronics also promoted Song Dae-hyun, head of the CIS Region and president of LG Russia, to president and CEO of the H&A unit, succeeding Jo.