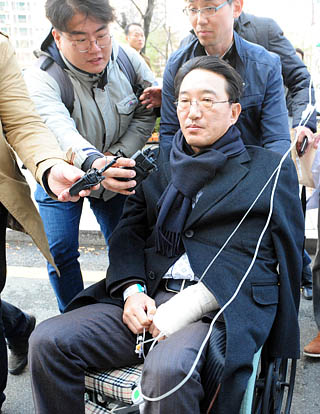 Hyun Ki-hwan, former senior presidential secretary for political affairs to President Park Geun-hye, slit his left wrist in a hotel room in Busan hours after being questioned by prosecutors about allegations that he took bribes from Cheongan Construction CEO Lee Young-bok and helped him lobby public officials.

According to authorities, Hyun slit his left wrist twice: at around 1 a.m. on Wednesday, just three hours after returning from the questioning, and then around 6:30 p.m. Wednesday.

The first wound was reportedly light. The second was 7 centimeters (2.75 inches) long and 1 centimeter deep and injured his tendon. Hyun reportedly used a utility knife both times. Hyun’s aide found him lying in a bathtub after slashing himself and contacted the front desk, who called the police. A hotel nurse treated his wound, and he was transported to a hospital.

Authorities said they found beer and hard liquor bottles on a table in the hotel room. In between the attempts to slit his wrists, Hyun reportedly was informed that prosecutors filed for a pretrial detention warrant for him. After receiving treatment at the hospital, Hyun was summoned to the Busan District Court on Thursday morning to determine the need for a pretrial detention warrant, a day earlier than originally scheduled.

“Prosecutors requested the court to issue a warrant to summon Hyun to the court today because prosecutors uncovered another serious crime Hyun committed,” said senior prosecutor Yun Dae-jin on Thursday. “We cannot confirm what that crime is yet.”

“Plus Hyun seems to be psychologically unstable, and this is a measure to protect him,” Yun added.

“Hyun at the court repeatedly said he is falsely charged,” said Hyun’s lawyer Lee Sang-keun. “He denied most charges against him.”

“It is quite harsh for authorities to summon Hyun to a court when he had undergone an operation not long before,” Lee added.

Hyun was questioned from 10 a.m. to 10 p.m. Tuesday about allegedly pulling strings for Lee’s lavish real estate development near Haeundae Beach, called LCT, after taking bribes from him.

Prosecutors suspect Hyun - who was senior presidential secretary for political affairs for President Park from July 2015 to June 2016 - may have received bribes from Lee and helped him win a contract with Posco E&C in July 2015, as well as sign a 1.78 trillion won ($1.51 billion) project-financing contract with financial institutions associated with the BNK Financial Group, including Busan Bank.

Prosecutors reportedly questioned Hyun about traces of financial transactions from Lee to Hyun, including checks deposited in Hyun’s bank account and evidence that Lee treated Hyun to golf games and took him out drinking. Prosecutors said the alleged bribes amounted to some hundreds of millions of won.

“I received gifts and gift cards from Lee, and went golfing and drinking with him,” Hyun reportedly told prosecutors during his questioning on Tuesday. “But they were unrelated to the LCT project, and I never received large amounts of money.”

“I helped an acquaintance borrow money from Lee,” Hyun said, “but as far as I know, that person paid Lee back.”

Hyun is also accused of violating the Political Funds Act over allegations that he received bribes from Lee while he was a lawmaker from 2008 to 2012. Lee, indicted on Monday for allegedly embezzling 70.5 billion won and violating the Housing Act, has also denied all lobby allegations.

In addition, Woo Byung-woo, former presidential secretary for civil affairs, was named by prosecutors as a suspect for dereliction of duty for failing to detect Choi’s abuse of power behind the scenes. Kim Ki-choon, former presidential chief of staff, is also accused of having been in the know about Choi’s alleged meddling in state affairs and the nature of her relationship with President Park.