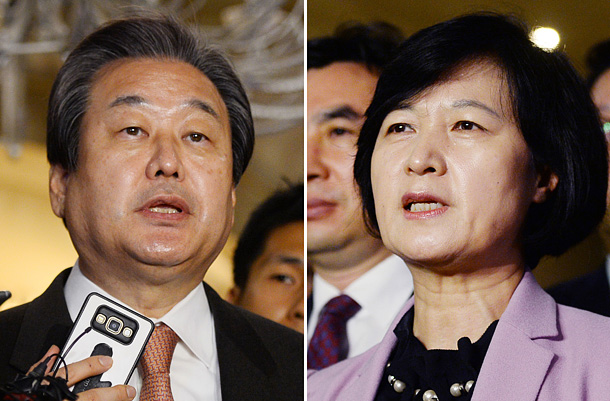 Rep. Kim Moo-sung, left, a leader of Park “adversaries” in the Saenuri Party, and Rep. Choo Mi-ae, right, chairwoman of the Minjoo Party of Korea, speak to reporters on Thursday after discussing the impeachment process. [NEWSIS]

A rift emerged in the opposition alliance to impeach President Park Geun-hye this week as last-minute talks among the leaders of three liberal parties broke down Thursday, while ruling party lawmakers united to promote an “orderly” resignation of the president in April.

Chairwoman Choo Mi-ae of the main opposition Minjoo Party of Korea, Rep. Park Jie-won, acting head of the People’s Party and Chairwoman Sim Sang-jeong of the Justice Party held a meeting Thursday afternoon to discuss a specific timeline for an impeachment motion in the National Assembly. Citing an agreement from the previous day, Choo and Sim said the motion must be submitted on Thursday to allow a vote today. Park disagreed. He said he opposed a vote that was guaranteed to fail.

The embattled president issued a public statement Tuesday saying she was willing to cut her term short. She asked the National Assembly to decide the fate of her presidency in response to a public clamor for her resignation over a still snowballing abuse of power scandal.

Her proposal was considered an alternative to impeachment. Since Tuesday, members of her own party who were supporting impeachment have swung to the idea of another kind of resignation, which has been code-named the “orderly” departure scenario.

Park won a five-year presidential term in the 2012 election and her tenure is scheduled to end in late February 2018.

The three opposition parties decided Wednesday to go ahead with the impeachment route, rejecting any negotiation with the ruling party. They thought a vote could come as early as today or a week later, on Dec. 9, which was favored by non-Park loyalists in the Saenuri Party, who are also referred to as Park “adversaries.”

Their solidarity, however, was broken in less than a day, as Minjoo Chairwoman Choo attempted to broker a deal with a high-profile Saenuri Party politician without consulting her opposition partners.

“I met with former Saenuri Chairman Kim Moo-sung earlier in the morning to check the willingness of the Park adversaries in the ruling party to cooperate with impeachment,” Choo said. “They, however, had no intention to impeach Park even on Dec. 9. In fact, the Saenuri Party decided that Park should resign voluntarily in April and never discussed the possibility of impeachment.”

Choo said Park will start a political operation to weaken the independent counsel investigation into her if she stays in office until April. “We will lose the momentum of impeachment if it is delayed to Dec. 9,” she said. “The Minjoo Party confirmed in the general assembly of lawmakers that the impeachment must be voted this Friday.”

In order to vote on the impeachment on Friday, submitting the motion on Thursday was mandatory. According to a law governing presidential impeachment, the motion is supposed to be voted on 24 to 72 hours after its presentation to the legislature.

Justice Party Chairwoman Sim also said the impeachment motion must be presented on Thursday without political calculations. “There are concerns about its passage,” she said. “But the lawmakers who will vote against it tomorrow will still vote against it next week.”

Rep. Park of the People’s Party, however, said he has no intention to cooperate with a plan that is destined to fail. “Proposing an impeachment cannot be our goal,” he said. “Passing it is the goal. But the Park adversaries in the Saenuri Party are showing very vague attitudes.”

Park adversaries in the Saenuri Party said they want to give the ruling and opposition leaders until next Wednesday to find a timeline for Park’s resignation. They said they will support the impeachment if no deal is reached and the vote takes place on Dec. 9.

Rep. Park of the People’s Party said the opposition parties need more time to persuade the Park adversaries in the Saenuri Party. Earlier in the morning, he also said, “If you present the motion when you know it is destined to be voted down, it will become a political pardon of President Park and the people will become confused.”

Signs of a rift were seen earlier in the morning, when Choo requested a meeting with former Saenuri chairman Kim and talked about a timeline for Park’s departure from office. Kim is a leading member of the group of Park adversaries in the ruling party.

The two politicians, however, failed to find common ground. While Choo said Park must resign before the end of January, Kim insisted that Park should leave the office in April. He also said the National Assembly must not impeach Park if she agrees to step down in April.

After the failed negotiation, Choo faced condemnation from other opposition parties and her own Minjoo members for having created a rift in the liberal alliance to force Park out through impeachment.

While the opposition bickers, the ruling party held a general assembly of lawmakers Thursday and formally adopted a stance that Park should resign in April and a presidential election should take place in June. “I will use this party stance in negotiations with the opposition parties and do my best to accomplish it,” said Rep. Chung Jin-suk, Saenuri floor leader.

A group of Park non-loyalists said Thursday that Park must publicly declare that she will step down at the end of April.

The idea of an April resignation and June presidential election was first proposed on Sunday by a group of 20 elder statesmen from the ruling and opposition parties. The idea was welcomed by the ruling party because it will secure enough time to groom a presidential contender. Impeachment could have been quicker.

The opposition parties already have clear frontrunners, such as Moon Jae-in and Ahn Chul-soo.

“Including the schedule for a nationwide presidential primary, we need at least six months to prepare for a presidential election,” Chung told the JoongAng Ilbo.

A party official said the party desperately wants to avoid impeachment. “How can you possibly ask voters to vote for us, if she is impeached?” he said. “If Park has an orderly departure, we may be able to unite the conservatives during the remaining months.”

The JoongAng Ilbo conducted a poll of 129 Saenuri lawmakers on Nov. 22 and 23, before Park made the offer to the National Assembly to decide her fate. That poll included Rep. Kim Yong-tae, who quit the Saenuri Party, to become an independent, and 31 lawmakers said they agree with impeachment.

In a new poll of that 31 lawmakers conducted on Thursday, 21 said they will vote against impeachment or will not participate in the vote if Park promises publicly she will step down in April. Of the 31 lawmakers, 27 responded to the poll.

Four others said they will defer their decision until Dec. 8. Only two said they will vote for impeachment regardless of the developments of this week.

But a first-term lawmaker who was surveyed told the JoongAng Ilbo that all the lawmakers who disagreed with impeachment on the condition of Park’s promise of an April resignation will vote for it if Park does not make the promise.