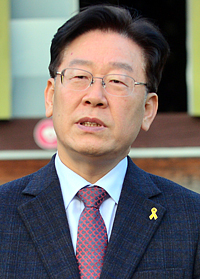 The popularity of Seongnam Mayor Lee Jae-myung skyrocketed over the past weeks based on his blunt demand for President Park Geun-hye’s resignation, making him a dark horse in the next presidential election.

Moon Jae-in, former chairman of the Minjoo Party of Korea and a presidential candidate narrowly defeated by Park in the 2012 race, led the poll by scoring 23.8 percent. His popularity was up by 0.7 percentage-points from the October poll.

Lee, also a Minjoo member, was ranked second with 17.2 percent, beating Ban within the margin of error. Ban was ranked the third with 15.2 percent. It was the first time that Research View included Lee in the poll. Ban’s popularity dropped 4.2 percentage-points from the last month’s survey.

Ahn Cheol-soo, former chairman of the People’s Party, was ranked fourth with 6.9 percent and Seoul Mayor Park Won-soon followed with 5.8 percent. According to the poll, 19.1 percent gave no response. Lee is a 51-year-old human rights lawyer-turned-politician. He is also a political maverick known for his upfront and relentless attacks on Park and her administration.

A native of Andong, North Gyeongsang, Lee comes from a poor family. His parents and their seven children lived in a single room in Seongnam, Gyeonggi. While working as a factory worker during the day, he studied at night to earn a high school diploma through a qualification exam. He studied law at Chung-Ang University and passed the bar exam in 1986. After working as a human rights lawyer, he was elected Seongnam mayor in 2010 and was reelected to the post in 2014.

He became a national figure during the Middle East Respiratory Syndrome (MERS) outbreak last year. When the Park administration refused to make public detailed statistics about patients and the hospitals they visited, he was the first mayor to make public such data from his city through social media. Lee’s move forced the central government to follow suit, which helped reduce the panic.

After the abuse of power scandal involving Park and her friend Choi Soon-sil broke out in October, Lee was the first politician to demand Park’s immediate resignation. He was also the first presidential contender to join a candlelight vigil, which he did in Seoul on Oct. 29.

Since then, Lee has consistently demanded Park resign. Ironically, Lee has an estranged brother who is a passionate supporter of Park. His elder brother Jae-sun was appointed Thursday as the head of the Seongnam Chapter of “Parksamo.” The name means “the group of people who love Park Geun-hye.”

After Bloomberg News called him “Korea’s Trump” by quoting some of his supporters in a recent article, Lee wrote on Facebook that he wanted to be called a successful Bernie Sanders.

Lee’s soaring popularity was evident in another survey. According to Realmeter’s latest poll, released Thursday, Lee was ranked third, following Ban within the margin of error.

In the poll, conducted from Monday till Wednesday, Moon scored 20.7 percent, ranking the most favored candidate for six consecutive weeks. Ban recorded 18.2 percent, ranking second. For the first time Lee scored a support rate higher than 15 percent, up by 3.2 percentage-points from last week. On Tuesday, his rating soared to 16.4 percent after he said Monday that the prosecution must obtain an arrest warrant to detain Park and investigate her after Park’s repeated refusals to be questioned.

Lee’s popularity went up among all age groups and almost all areas including both Jeolla and Gyeongsang regions. Among supporters of the progressive Justice Party, Lee scored 44.2 percent of support.