GDP growth revised down to 0.6 percent

GDP growth revised down to 0.6 percent 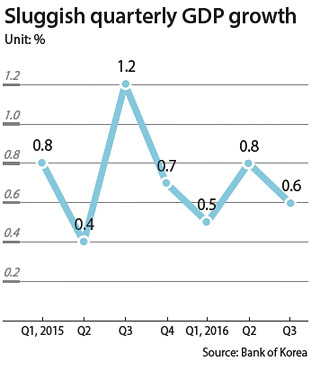 Korea’s quarterly economic growth was revised to 0.6 percent in the third quarter from the preliminary estimate of 0.7 percent, according to the central bank on Friday, affected by a weak manufacturing sector.

Real GDP increased 2.6 percent during the quarter from a year earlier, though the Bank of Korea’s annual growth forecast stood at 2.7 percent.

The downward adjustment indicates that export headwinds such as the Galaxy Note7 fiasco have weighed on the country’s economy while segments that used to drive growth had lower increases than previously estimated.

The share of manufacturing in GDP contracted 0.9 percentage points from July to September from the previous quarter, registering the lowest growth since 2009, when the country reeled from the global financial crisis.

The Bank of Korea noted that the recall of the Galaxy Note7 and the Hyundai Motor strikes were setbacks for the sector.

“The tepid growth in the manufacturing sector, which is the lowest in seven years and half, pushed down the growth rate in the third quarter as the sector is impacted by the strike in the automobile industry and the production suspension of the Galaxy Note7,” said Lee Kwan-kyo, an official in BOK’s economic statistics division.

The modest improvement stemmed from robust growth in construction investment, which rose 3.7 percent from the previous quarter, though the preliminary data, announced in October, said that the spending grew 3.9 percent. The central bank said residential and commercial construction contributed to the increased spending.

“As we fully factored in the earnings [in the construction industry] from September, construction investment tuned out to be lower than previously estimated,” said the official.

While the uptick in the real estate market helped prevent Korea’s economic growth from tumbling further, the country likely will not receive a boost going forward.

Financial authorities warned of an overheated housing market in some parts of the country and moved to quench the heat of the market. In August, financial authorities vowed to restrict the supply of new residential homes provided by state-owned construction agencies and limited so-called group mortgage loans to groups of apartment buyers, arguing that the housing boom is leading to higher debt.

The weak exports and the government’s move to temp down the housing market signal a tough 2017.

The Organization of Economic Cooperation and Development last month lowered Korea’s outlook for next year 0.4 percentage points to 2.6 percent. In June, the OECD projected Korea’s growth for 2017 at 3 percent.