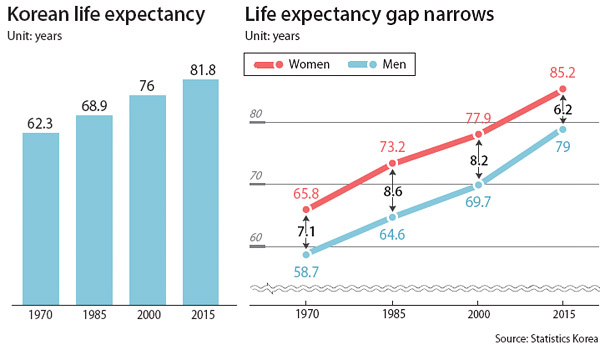 Korean babies born in 2015 are expected to live 82.1 years, up 0.3 years compared to the babies born a year earlier, as medical advances and efforts to maintain a healthy lifestyle reduce the risks of death, government data showed Friday.

“Life expectancy of Koreans continues to improve as Koreans are eating more nutritious foods and medical technologies have improved,” said Lee Jee-yeon, a director at the statistics agency. “It also is true that more Koreans are taking care of their health through various ways, such as by regularly exercising and trying to keep in shape.”

The life expectancy of men rose 20.3 years and women’s rose 19.4 years when compared to those born in 1970. The gap between men and women was 6.2 years and it has been narrowing continuously after hitting a peak of 8.6 years in 1985.

“The life expectancy for women already was very high and it is growing at a slower rate compared to male counterparts since men’s life expectancy was relatively lower,” said Lee. “Additionally, more female Koreans are working nowadays, which means they are exposed to drinking and smoking cigarettes for social life.”

The possibility of male babies living at least 80 years was 56.5 percent and the female probability was 77.7 percent. The figure for male rose 1.1 percentage points and that for females rose 0.6 percent from a year ago.

When compared to 1970, the year the government began compiling data in its current form, the percentage for male babies living 80 years or longer rose 44.9 percentage points and the figure for female rose 44.7 percentage points.

If cancer is excluded from the possible cause of death, the life expectancy of male babies rises 5.1 years and that of female babies will rise 2.9 years.