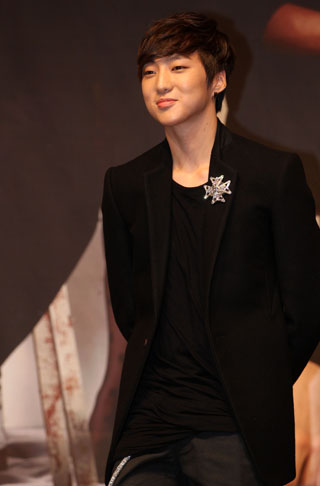 The singer’s song “You,” for his upcoming web drama “Love for a Thousand More,” will be released on Dec. 6, according to music production company Highgrnd on Friday. The company said that the upcoming release was produced by their “genius” 18-year old producer called 8, who was scouted by the company while still a high school student.

The song will also be the first part of the music company’s “Working Holiday” project, where they are planning to release a number of songs this month featuring their musicians.

Kang stars in the lead role of the fantasy romance web drama alongside band member Kim Jin-woo, actor Jang Ki-yong, and actresses Hwang Seung-un and Kim Hee-jeong. The show will air its first episode on Dec. 5 through Naver TV Cast. It is being jointly produced by CJ E&M and the singer’s agency YG Entertainment.

The upcoming song is the singer’s first solo track since he released his single “Stealer” in 2013. He originally debuted as a solo artist that year after finishing in the top 4 of Mnet audition program “Superstar K2.”