VW leader on accelerating in midst of crisis

VW leader on accelerating in midst of crisis 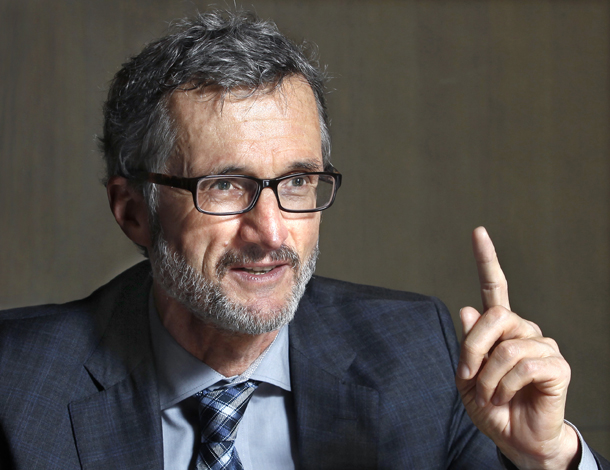 “Crisis is an accelerator for change,” says Georg Kell, chairman of Volkswagen’s two-month-old international Sustainability Council, set up to counter the automaker’s tainted reputation after its widespread emissions-rigging scandal.

When he sat down for an interview on Dec. 2 at the Conrad Hotel in Yeouido, southwestern Seoul, he seemed excited. “I personally really like crisis,” he said.

Volkswagen has undertaken radical moves such as dismissing 30,000 staff members and replacing them with IT engineers, aiming for a rapid shift to electrification and digitization of transportation. The carmaker also plans to build a battery plant in Germany, which would be a first in the country.

“It takes a crisis for big companies to change direction,” Kell said. “The CEO of Volkswagen actually put it quite nicely during one of the internal discussions. He said, ‘Look, we would have done this change probably anyway in five or six years’ times but because of the crisis we are now forced to accelerate. The more I think about it the better it is, because if we prepare the future then it actually makes sense to start earlier.’

“So it [the sustainability council] is a serious organization.”

The council launched in September as an immediate reaction to recover from the automaker’s emissions scandal and to “critically and destructively engage with CEO leadership on the issues of climate change and related governance issues,” Kell says. Among nine experts invited to join, Kell was appointed to lead the group for his long career of pursuing sustainability management.

He is the founding director of the United Nations Global Compact, the world’s largest voluntary corporate sustainability initiative, launched in 2000, and is now Vice Chairman of Arabesque Partners, an Anglo-German asset management firm that integrates environmental, social and governance data with investment strategies.

Every year since 2001, Kell has been named among the “100 Most Influential in Business Ethics” by Ethisphere Institute, an Arizona-based organization that defines, measures and promotes corporate ethics.

“Within the corporate world, over the last 20 years, step-by-step changes have been introduced. Many companies are still slow and very early in the learning curve but … more and more companies luckily realize that we have to move towards low carbon, resource efficiency is a good thing and that treating your workers well actually makes sense to build a positive brand, positive engagement,” Kell says.

Sustainability, in his terms, means a “business is fully conscious in how they impact the lives of people and the natural environment.” Until recently, businesses lacked sustainability, as there was little understanding of how the world is small and we are all connected, according to Kell.

“On average, companies which perform better on environment, social and governance outperform companies that are not doing very well [in those factors.],” Kell said. “This is a fundamental game changer because it means … those who are lagging will be punished indirectly by the market.”

As for Volkswagen, while it has long been a popular brand in Korea, its market share in the local import car market halved to 7.09 percent in October from 14.67 percent last year, while Audi also fell from 13.34 percent to 8.62 percent, according to data from Korea Automobile Importers and Distributors Association.

When asked to assess how Korean companies are doing in sustainable management, he said, “Korean companies are actually, by global comparison, fairly strong on a number of issues, where they seem to be lagging behind is a little bit on the governance issue, which is a critical one in many countries.”

According to Kell, Korea is very strong in environment and resource efficiency thanks to highly developed tech industries. Social aspects are partly strong as there is “very high level of self-education and social cohesion.” Korea needs to develop in governance and information disclosure issues, he said.