Experiencing a world of culture through wine

Experiencing a world of culture through wine 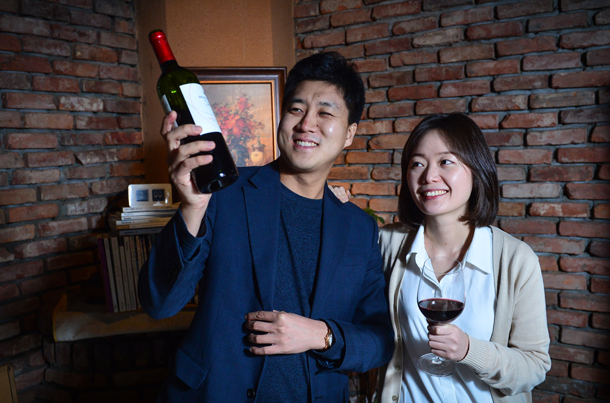 Bae Doo-hwan and Um Jung-sun, who married in 2013, traveled the world’s wineries from 2014 to 2015. The couple says they hope to share what they have learned about different kinds of wine. [WOO SANG-JO]

“French Wine Travel,” a travel guide to French wineries published in November, is a must-see for wine lovers. Bae Doo-hwan and Um Jung-sun, a couple who traveled around the world’s wineries from 2014 to 2015, share their knowledge on different kinds of wine, as well as travel information.

“We walked for an hour in the hot sun of the Colchagua Valley, central Chile, just to get a taste of this wine,” Bae said, as he introduced Mont Gras, an award-winning Chilean wine. He is a contributor to wine magazines, and his wife Um used to work as a sommelier.

The couple, who met during a graduate program studying zymurgy, or chemistry of fermentation processes in brewing, dreamed of going on a world winery tour even before marriage. “My husband proposed, saying we should go on a winery tour, and we saved everything we could for marriage and a trip after that,” said Um.

The couple quit their jobs six months after getting married and left for a world tour. They also started a blog called “Around the World Following Wine,” to write about their impressions of different kinds of wine and share their tour experiences. Bae said, “We bumped into a bottle of wine, which cost us around $2, as we walked down a back road in Italy. I can never forget the taste of it. We wanted more people to know about various kinds of wines, which cannot be valued just by price.”

The couple visited 14 countries including France, Chile and South Africa. Um recounted, “We chased after fall, the harvest season for grapes, as we traveled around the world. We tasted over 2,000 bottles of wine from over 280 wineries in 365 days.”

Bae and Um picked France as their favorite destination. “The fact that all nine famous wineries in France are also the most visited tourist attractions,” said Bae, “shows that wine cannot be separated from French history and culture.”

When asked about general perception that a winery trip is expensive, he replied, “Most wineries don’t charge visitors for sampling wine, so you can actually save money. We spent around 62 million won ($53,003) on our one-year-travel.”

Since returning to Korea, the couple hold lectures on wine and post recipes of snacks to be served with wine. Their blog now has roughly 14,000 subscribers.

The two plan to publish another book on a world winery tours. They said, “We want to share more stories about different kinds of wine.”