Giving new life to relics of the past

Giving new life to relics of the past 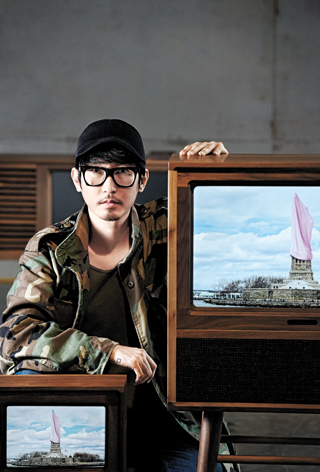 Zeong Chee-ho, photojournalist and art director of the artist group Utmost, posing next to his Walnut TV set, inspired by analog TVs that he found at flea markets. [ZEONG CHEE-HO]

Against the wall of a studio in Yeonhui-dong, Seodaemun District, Seoul, 20 or so analog TVs manufactured in the 1970s and 1980s are stacked, one on top of the other. And when switching on the TVs, they actually worked. The wall of TVs resembles the artwork by the famous international artist Nam June Paik. The owner of this studio is the 36-year-old photographer and artist Zeong Chee-ho. And recently he created an exhibition inspired by these secondhand analog TVs, titled “rebirth.”

His recent work, “Walnut TV set,” is based on the analog TVs that were sold in Korean markets in 1972. He used the frame of analog TVs to create new TVs with LED screens.

“Depending on one’s perspective, old things that are thrown away can be reinvented into a masterpiece,” said Zeong. “Wouldn’t that be the true function of art?”

As the pop culture of the 1980s and 1990s resurfaced with the Korean drama series “Reply,” which began in 2012, and as recently as early this year by reinterpreting the Korean industrial era, a similar nostalgic vein in Zeong’s work struck a chord with art lovers.

Many of his artworks were sold during his exhibition “rebirth” that was held at the Younhyun Trading’s Space B-E Gallery in Nonhyeon-dong, southern Seoul, last month.

One of the buyers was former German chancellor Gerhard Schroder, who purchased two of Zeong’s TVs during his recent visit in Seoul.

Zeong used to be a photojournalist working for various news organizations, including the Korea JoongAng Daily, and during his six years in the field he won eight photojournalism awards from the Korea Press Photographers Association. But in October 2011, just before his 30th birthday, he left to pursue his dreams in arts.

Because of his habit as a photographer of taking keen notice of objects, he enjoyed visiting flea markets that were full of antiques.

One day when he found a secondhand TV, an epiphany hit him.

“Korean TVs are recognized throughout the world as a state-of-the art product,” Zeong said. “But it dawned on me that this was only possible because of the efforts our fathers’ generation put in, even by copying American and Japanese products.

“Although they may not be the top products, I wanted to celebrate our past, which is a beautiful third class.”

Since then, he started aggressively collecting secondhand TVs. Part of it was out of self-driven responsibility that someone had to collect these antiques or else the next generation may not know about the existence of analog TVs.

His collection soon grew to 30 analog TVs, 20 or so of which actually work.

In the beginning of the year, Zeong started an art group called Utmost and is currently working as the art director of this group. He wanted to pass on his know-how of his successful transformation as an artist in such a short period to young artists.

Utmost’s motto is to transform things that are considered useless into something useful. One of the items recreated by the Utmost artists is the Bandazi table. The table is inspired by the design of a small wooden chest that was used to store clothes in the 1950s.

“We want to make meaningful records and pass on the past through art,” Zeong said.