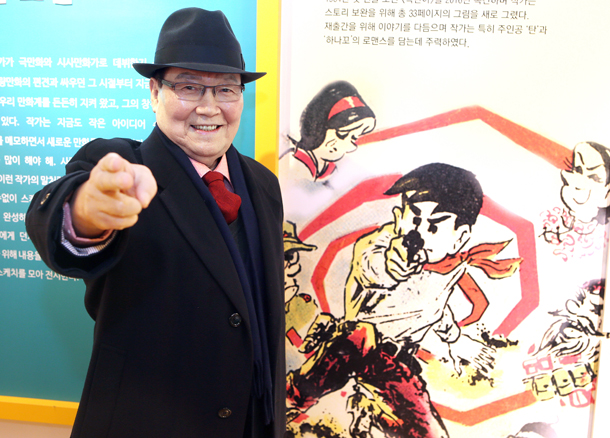 The Korea Manhwa Museum is holding an exhibit titled “Park Ki-chung’s ‘Challenge,’” which runs through April 9. It’s a retrospective of the 60-year career of one of Korea’s foremost cartoonists.

Park, born in Manchuria in 1935, came to Seoul after Korea’s liberation from Japan’s colonial rule. The young Park, who experienced difficulties adjusting to the busy city, found his outlet in drawing.

Park gained popularity in the 1960s with cartoons that reflected the struggles of the time in the aftermath of Japan’s colonial rule (1910-45) and the Korean War (1950-53). His major work “Challenger,” a series published from 1964 to 1965, tells the story of Hoon, a survivor of the Great Kanto earthquake in 1923, who overcomes discrimination in Japan and achieves self-realization as a boxer.

“I received many fan letters then,” Park said as he looked at the cover of a bound copy of another series, “Skirt Unit.” “It’s a story about a woman’s soccer team defeating men, which was shocking to many at the time.”

Park succeeded in both narrative series - what would be called graphic novels today - and editorial cartoons, which is rare for a cartoonist. “Originality was what I focused on, whether it be in the drawing or the content,” Park said.

“I didn’t read comic books at all in fear that I’d imitate something unconsciously. But new ideas came into my mind at any moment, and I even quit driving so I wouldn’t be distracted by them.”

Following the reissue of “Challenger” in book form in 2006, the Korea Manhwa Contents Agency reissued “Pok Tan-ah,” a tale of a pro-independence fighter and Japanese spies during colonial rule of Korea, this year. Park redrew parts of the cartoon that were lost over the years.

“Censorship at the time didn’t allow me to draw about love,” he said with a smile, “but this time, I drew everything I wanted to, of course in consideration of the story I had already developed.”

Park joined the JoongAng Ilbo in 1978 and became an editorial cartoonist. “I was used to drawing narrative cartoons as a freelancer,” he recounted, “but being a member of a company was a different thing. I was pressured with a deadline everyday and received threatening phone calls about the content of my cartoons.

“If I can compare drawing narrative cartoons to running a marathon, then editorial cartoons are definitely a sprint. It’s thrilling but at the same time stressful.”

Park left the JoongAng Ilbo in 2011, but says he is still passionate about taking on new challenges. “I finished an outline for a baseball cartoon narrative, but I haven’t started drawing yet. It will be such a time-consuming task. I have another idea about a satirical cartoon using animals as the main characters as well.”