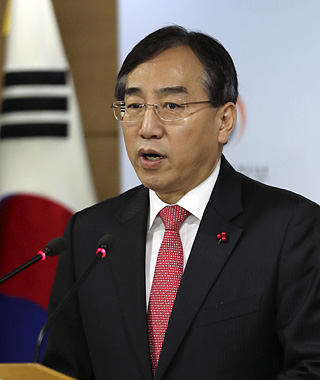 Lee Suk-joon, minister of the Office for Government Policy Coordination, speaks about sanctions on North Korea at the government complex in Seoul on Friday. [AP/NEWSIS]

The South Korean government on Friday announced a fresh set of unilateral sanctions against North Korea for its weapons of mass destruction program, including blacklisting some of the country’s leader Kim Jong-un’s top aides.

South Korea’s Prime Minister’s Office unveiled its blacklist, adding 35 entities and 36 individuals, including Chinese nationals, believed to be playing a critical role in developing weapons of mass destruction or contributing to the North Korean regime’s efforts to secure foreign currency to finance its nuclear and missile program.

The announcements follow the heels of the new UN Security Council’s Resolution 2321, unanimously adopted on Wednesday to curtail North Korea’s revenues from exports, especially by capping sales of coal, to penalize the regime for its fifth nuclear test on Sept. 9.

“Individuals and entities targeted by the sanctions are prohibited from making a foreign exchange and financial transactions with our people and are subject to asset freezes in the country,” said Lee Suk-joon, a minister with the Office for Government Policy Coordination, said at a press conference at the government complex in central Seoul Friday.

“Through sharply expanding the scope and quality of our unilateral sanctions against the North, our government hopes to supplement the UNSC Resolution 2321.”

Despite expectations that Hwang may be included in Seoul’s earlier economic sanctions announced in March, he did not make the final blacklist then. Hwang had already been sanctioned under the UNSC Resolution 2270 and the U.S. Treasury’s blacklist.

However, including such top officials in the blacklist may also cut off possible routes of inter-Korean dialogue because under sanctions they would not be able to visit Seoul.

Hwang, then considered to be the second most powerful person in the regime, led a North Korean delegation that also included Choe in a surprise visit to the South on October 2014 to attend the closing ceremony of the Incheon Asian Games and met with senior South Korean officials, including then Unification Minister Ryoo Kihl-jae and Blue House national security chief Kim Kwan-jin.

Hwang also took part in the high-level inter-Korean dialogue at the joint border village of Panmunjom which led to the breakthrough Aug. 25, 2015 deal that de-escalated high military tension after the maiming of two South Korean soldiers in a land mine explosion.

Washington in late September already levied sanctions on Dandong Hongxiang, based in northeastern China, suspected of contributing to the proliferation of weapons of mass destruction in North Korea. The four executives were also blacklisted.

Entities blacklisted further included the Workers’ Party, the State Affairs Commission, which Kim Jong-un is chairman of, and North Korea’s flagship carrier Air Koryo. But blacklisting Air Koryo could cut off North Korean officials’ mode of transport to the South.

South Korean companies, too, will face tougher surveillance on import of North Korean products especially because textile manufacturing is considered another largest source of export revenue for Pyongyang that can be funneled into its WMD program.

The Prime Minister’s Office also said it plans to compile and announce a submarine “watch-list” with the international community to deter the North’s SLBM, or submarine-launched ballistic missile, capabilities.

Seoul also designated 11 types of minerals from North Korea as targets of strict monitoring in an attempt to prevent North Korean exports from entering the South via third countries. It previously included just 22 agricultural and marine products.

Along with UNSC Resolution 2270, implemented in March, countries including South Korea, the United States, Australia and the European Union have imposed separate unilateral measures on the North as well for its fourth nuclear test in January and subsequent long-range ballistic missile launch in February.

The South Korean government revealed Friday the results of these UN and unilateral sanctions, which it estimates have curbed Pyongyang’s foreign currency income by about $200 million between March and November.

Following North Korea’s fourth nuclear test on Jan. 6 and subsequent long-range missile launch on Feb. 7, Seoul unilaterally announced on Feb. 10 it will shut down operations at the Kaesong Industrial Complex, the last vestige of inter-Korean business cooperation. The South Korean government said the revenue helped finance the development of the North’s weapons of mass destruction program.

After the UN Security Council unanimously adopted its toughest-to-date resolution on Pyongyang on March 6, South Korea also announced on March 8 a new set of unilateral sanctions on North Korea, including a blacklist of 40 individuals and 30 entities.

The Japanese government also announced it will impose new unilateral sanctions on Pyongyang for its fifth nuclear test, a move which was “welcomed” by the South Korean Ministry of Foreign Affairs.

Chief Cabinet Secretary Yoshihide Suga said its new blacklist includes Chinese organizations and individuals found to have been linked to North Korean nuclear or missile development projects whose assets in Japan are to be frozen.

Kyodo News reported that Prime Minister Shinzo Abe told a meeting of cabinet ministers Friday morning that Japan decided to carry out further sanctions in coordination with the United States and South Korea to comprehensively resolve the concerns about abductions of foreign nationals and the development of its nuclear and missile program.

Seoul, Washington and Tokyo have been in close coordination over the announcement of the sanctions, including through a trilateral foreign ministerial meeting in New York on the sidelines of the UN General Assembly in September.