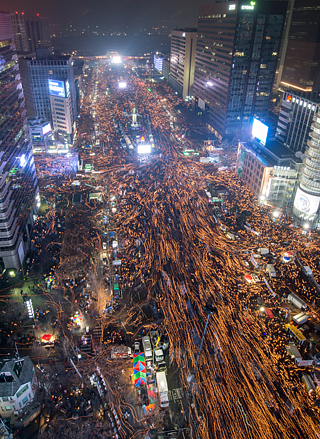 A sixth mass rally to demand the ouster of President Park Geun-hye could get as close as 100 meters (330 feet) of the Blue House tomorrow, the closest that protesters will have gotten to the presidential residence since the weekly demonstrations attended by millions in central Seoul began last month.

Rally organizers submitted an injunction to the Seoul Administrative Court on Thursday after police banned the route leading up to the three-way intersection in Hyoja-dong, central Seoul, just steps from the Blue House. In the past four rallies, the court had overruled the police ban and allowed protesters to move closer each time to the presidential residence. As of press time Friday evening, the court still has not announced its decision for the upcoming rally.

There will also be 11 portable bathrooms at Gwanghawmun Square, Seoul Plaza and Cheonggye Plaza, along with 210 other bathrooms that will be open throughout downtown.

The city will also extend subway service, adding at least 10 trains to subway lines No. 2 to 5 and two more trains on line No. 1. “There will also be a total of 44 buses on six lines that run through the city during the late hours on Saturday,” the city government said in a press release. “Around 2,400 taxis will also be available at night.” Since Nov. 26, the government has also added 11 more buses to six nighttime routes every Saturday.

The mass rallies demanding Park’s resignation over a broad corruption scandal involving the president and her longtime confidante Choi Soon-sil have been drawing closer to the Blue House each week as the number of participants has swelled.

At the first demonstration on Oct. 29, 30,000 protesters were stopped by a police line near the statue of King Sejong on Gwanghwamun Square, about 1,300 meters from the Blue House.

By the fifth rally last Saturday, as much as 1.5 million people were gathered in downtown Seoul, with the edge of the protest reaching just 200 meters west of the Blue House.