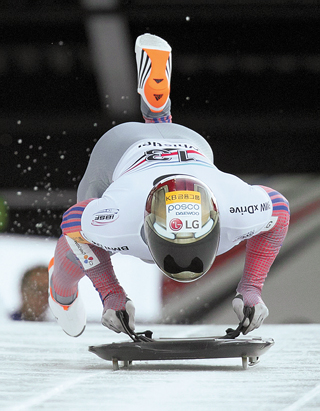 WHISTLER, British Columbia - Yun Sung-bin was perhaps the biggest surprise on the World Cup men’s skeleton circuit last winter, when he finished second in the season-long points standings. He’s got eyes on a better finish this season.

Yun prevailed in the opening World Cup race of the season on Saturday, finishing two runs at the Whistler Sliding Center in 1 minute, 45.86 seconds. Russia’s Alexander Tretiakov was second in 1:45.98, and Matt Antoine of the U.S. used the strength of a flawless second heat to grab the bronze in 1:46.22.

Yun crossed the finish line, took off his helmet and let out a celebratory yell. He held on for the win, even though Antoine had the fastest time in the second heat.

“I love this track,” Antoine said. “It’s fast, difficult, and every run here is a challenge. You have to work for every inch, and this is what I love about this sport.”

The surprise might not have been who won, but rather who didn’t even medal. Latvia’s Martins Dukurs, the seven-time World Cup champion, was fourth - snapping a 21-race streak in which he finished either first or second in a World Cup race.

Dukurs last missed a podium in a World Cup on Dec. 13, 2013, when he finished eighth at Lake Placid. That’s where the circuit is heading next, racing in two weeks.

Antoine had a streak snapped as well - he hadn’t medaled in any of his last 12 World Cup starts, going back to January 2015. He changed training regimens this winter in an effort to improve his time and form at the start, and saw immediate dividends Saturday.

“In this sport you can’t give up time at the start if you want to be competitive at the finish,” Antoine said. “It was frustrating going into the races last season knowing I had a disadvantage. Getting back into a program with Jon Carlock helped me get back on track, and now I walk to the line with confidence again.”

Nathan Crumpton was 14th for the U.S., and teammate Kyle Tress took 20th.