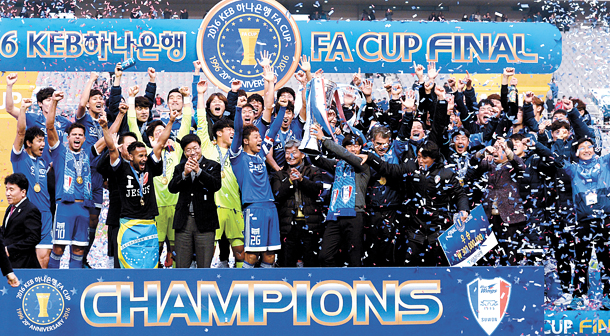 Suwon Samsung Bluewings celebrate their FA Cup title after defeating FC Seoul in this year’s Korean FA Cup final on Saturday. This was Suwon’s first FA Cup title in six years, and the fourth in club history. After winning the FA Cup, the Bluewings have gained a spot in next year’s Asian Champions League, despite finishing in seventh in the top-flight K-League Classic. [NEWSIS]

No one could have asked for more dramatic ending to the matchup featuring one of the most intense rivalries in Korean professional football. In Saturday’s Korean FA Cup final showdown between K-League Classic’s Suwon Samsung Bluewings and FC Seoul, regulation and extra time weren’t enough to settle the score. But by the end of the penalty shootout, it was the Bluewings that came out smiling while Seoul were left to hang dry.

During the match on Saturday at Seoul World Cup Stadium, Seoul topped Suwon 2-1, making this year’s final, which is played as a two-leg series, a tie at 3-3 on aggregate. Although away goals play as a tie breaker, the two were in a draw in that regard as well, having scored one away goal each.

The only way to settle the championship was through a penalty shootout.

The shootout was quite a spectacle, with no player failing to find the back of the net, until the very last spot kick of the day.

Both had successfully drained nine shots and Seoul’s goalkeeper Yu Sang-hun went to the line to take his shot - the 10th and last shot for the team. With the pressure mounting, the goalie hit the ball hard but missed the goal, going wide above the cross bar. It was now Suwon keeper Yang Hyun-mo’s turn to take a crack at ending the three-hour long match. With Seoul’s Yu in front of the goal ready to make up for his mistake just a minute earlier, Yang calmly approached the ball and sent it to the right corner of the post. Yu misread the direction and jumped to the opposite direction, watching helplessly as the ball shook the back of the net.

That was the end for K-League Classic champs Seoul, who had been looking to clinch a double-crown this year by also winning the FA Cup.

After the match, Hwang Sun-hong, the skipper of Seoul, expressed his disappointment and said, “We experienced difficulty trying to put pressure on the ball.”

“But I think our players did their best until the end,” he added. “I think we have some work to do and in terms of quality, we will have to make some decisions to increase our competitiveness.”

“I’ve been telling the players about keeping their cool,” Hwang went on. “And I think we got a little bit too excited in decisive moments. We will have to fix this in time. We just ran out of gas at the end”

As for Suwon, this is their first FA Cup title in six years.

While Suwon had a rather disappointing season this year, finishing seventh in the Classic, and being ousted from the Asian Champions League just after the Group Stage, the FA Cup is a bright spot for Seo Jung-won, Suwon’s manager.

In fact, the skipper became the second person in Korean professional football history to capture an FA Cup trophy as a player as well as a coach. As the winner of the Korean FA Cup, Suwon has also gained berth to next year’s ACL.

“[After the struggle in the league] we’ve discussed about overcoming the crisis and finishing the year well and I think we were able to live up to that decision,” Seo said. “And it feels better to win the cup as a manager than as a player.”