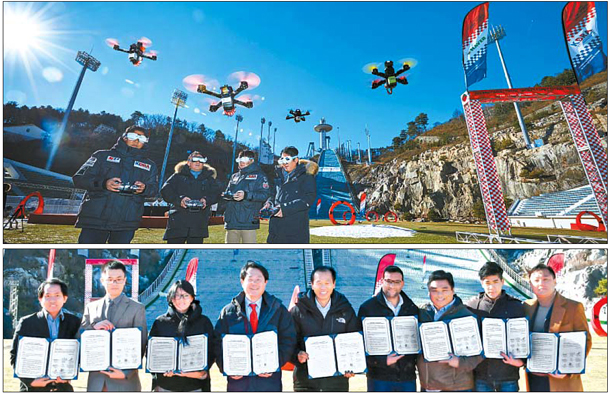 Top: Pilots showcase their drones as they prepare for the International Drone Sports Competition which took place over the weekend co-hosted by JoongAng Media Network, the Provincial Government of Gangwon and Korea Drone Racing Association. Bottom: From left, Junyawat ChartAnuluk, representative of Drone Academy Thailand from Thailand; Louis Ching, representative of D1 from China; Angela Jacques of Aerial GP from Mexico; Kim Gyo-joon, the publisher of the JoongAng Ilbo, Choi Moon-soon, governor of Gangwon; Rubi Liani of FRIL from Israel; Charles Zablan of IDRA from the United States; Yu Kotera of JDRA from Japan; and Kang Hee-dong, the head of KDRA pose for a photo after signing a memorandum of understanding to work together in promoting drone sports. [KOREA DRONE RACING ASSOCIATION / INTERNATIONAL DRONE RACING ASSOCIATION]

One of the officials of the competition said about the event, “With the interest in e-Sports cooling off, drone sports are emerging as events to watch for in the near future. [By hosting these events] JoongAng Ilbo and Gangwon province have stepped up to help Korea become the pioneer of the field.”

JoongAng Ilbo, the Provincial Government of Gangwon and drone associations of seven countries also signed a memorandum of understanding on Friday to streamline the development of the sport. The World Air Sports Federation, an international organization with the basic aim of furthering aeronautical and astronautical activities worldwide, was present at the conference as well and said in its official website that, “FAI is supporting this new and fast growing sport, its development in a sustainable way and with a long-term view.”

As a new territory in exploration, drone sports are without established international regulations yet. However, over the weekend, representatives of drone associations of different countries as well as industry leaders discussed standardizing events and rules in detail as well as establishing the International Drone Committee.

The conference was followed by a racing competition that took place on Saturday and Sunday with 110 participants from 16 different countries including pilots from Korea, the United States, China, France and Spain. Four different events were showcased during the competition - the first person view race, FPV freestyle, drag race and slalom race.

While the concept of sporting events featuring drones is rather new, drone racing is garnering attention as possibly the next big thing in the world of sports. Just recently, the Drone Sports League signed a deal with the sport television network ESPN in the United States for broadcasting rights, indicating the growing interest and demand on the sport. When the deal was first signed in September, The New York Times wrote that, “It’s the biggest move yet into the mainstream for an activity that started just recently. It bloomed quickly from hobbyists gawking in parking lots into a competitive industry.”

Over the weekend, it was Korea’s Kim Min-chan that won the freestyle event. Kim, a 12-year-old, has already gained spotlight as the “Drone Genius” when he topped the Asia Cup Shanghai in July. He’s already won nine different competitions in and outside of Korea and earned more than 100 million won ($85,000) in prize money.