The changing concept of travel accommodations : With home-sharing services, Korea has become a hotspot for alternative lodging

The changing concept of travel accommodations : With home-sharing services, Korea has become a hotspot for alternative lodging 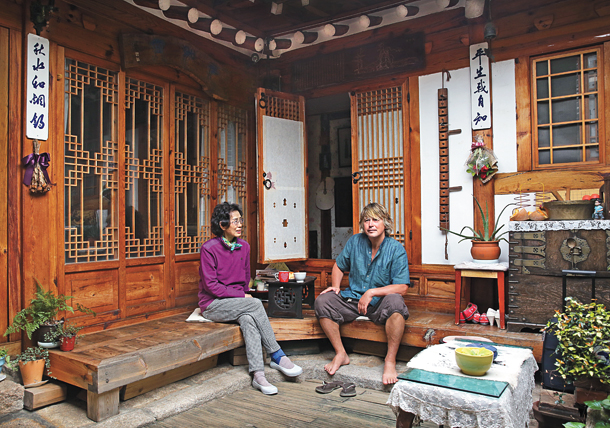 Russian traveler Victor Morozov, right, decided to stay at hanok, a traditional Korean home, in Bukchon, central Seoul, for his first trip to Korea. The 72-year-old Han Kyu-nam, left, is the host of the hanok who registered her home on a home-sharing site. [YIM SEUNG-HYE]

SECOND IN A TWO-PART SERIES:

Home-sharing services like Airbnb have certainly changed the way people travel around the world. They promote their services insisting that travelers can have a unique vacation experience by living like a local, while apartment tenants can earn some extra cash by renting out their abode while they are on holiday or extra rooms in their homes. The service may even help solve problems of a lack of accommodations in Korea. It sounded like an optimal business model and has catapulted to popularity in recent years. But it soon came under fire across the globe for bringing along numerous complaints from existing lodging businesses saying it’s not fair to see increased competition that do not pay commercial taxes like they do, as well as from citizens who suddenly found themselves living next to noisy and often selfish travelers.

In August, a news report of a Korean woman surnamed Kim, who complained that she was shocked to see a group of men who were drinking on a rooftop of her apartment complex only wearing briefs, quickly took flight online. The report said the 24-year-old college girl living in Yeonhee-dong in Seodaemun District, western Seoul, went up to hang out her laundry on a night of Aug. 12 but had to run back down to her home upon witnessing the bizarre scene. She found out that they were Chinese tourists who were temporarily renting out an apartment on the second floor of her building through a home-sharing service. Kim said in the news report that she couldn’t sleep all night because of her noisy new neighbors in briefs.

Another woman surnamed Kang, 39, living in the same officetel (a studio flat rented to residential and commercial patrons) as this reporter expressed distress saying that she thinks her next door neighbor listed the studio apartment on the home-sharing service.

“I always see different people going in and coming out from next door,” said Kang. “I often get woken up in the middle of the night because of noises coming from outside like tourists pulling their suitcases along the corridor and talking out loud to themselves looking for their room. Some tourists also chuck bags full of food scraps mixed with rubbish into the corridor instead of recycling them properly in the basement. It makes me frown every time.”

Kang said that she saw a sign on the noticeboard saying that it is illegal to operate a guesthouse in the building so she reported it to the management office.

According to statistics compiled by the Korea Tourism Hotel Business Association, the occupancy rate of people using hotel rooms in Korea in 2011 was 80.7 percent. That number dropped to 63.52 percent in 2014 and was just around 60 percent last year. Meanwhile, people using Airbnb in Korea increased by 153 percent during the same period. There are about 16,000 accommodations available on Airbnb in Korea, which is about eight times higher than the 2,000 back in 2013 when it first started its business in Korea. According to Airbnb Korea, about 500,000 people found their lodgings through the service last year, which is three times higher than the year before.

Along with the boom of home-sharing businesses in the country, illegal operations of home-shares and guesthouses have also been on the rise. In an effort to root out the illegal operators in Seoul, the Ministry of Culture, Sports and Tourism has launched a joint crackdown operation since April last year, together with the Seoul Metropolitan Police Agency’s tourist branch and the Seoul Metropolitan City. According to the police agency, it has discovered 758 unregistered lodging services this year (Jan.-Aug.) alone in Seoul.

According to the Ministry of Culture, Sports and Tourism, they are continuing with the crackdown to effectively control the illegal operations to help better accommodate tourists in Korea, however, stressed that it’s important for the citizens as well as tourists to actively report any illegal operators if they encounter one. 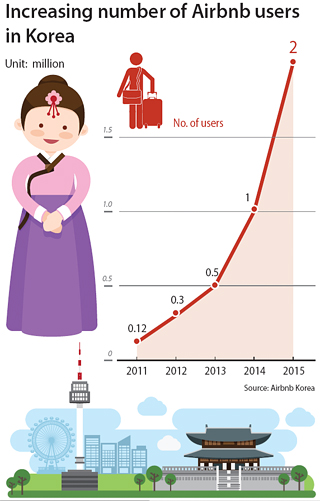 In efforts to offer tourists visiting Korea a more secure and legal place to stay, Korea Tourism Organization has been operating certification systems such as “Goodstay” and “Koreastay” since 2006 across the nation.

According to KTO, a Goodstay logo is given to “reliable and affordable accommodations that pass the organization’s strict assessments.”

There’s also the “Koreastay” certification that’s given to certified homestays and guesthouses that can provide foreign tourists a special opportunity to experience Korean culture and lifestyle by staying at a home together with a Korean family or a Korean host. According to the organization, Koreastay hosts are “carefully selected after undergoing strict assessment of criteria such as residential environment, guestroom and cleanliness, mindset, service and convenience.”

Both certified lodgings can be searched at www.goodstay.or.kr and www.koreastay.or.kr.

However, KTO said it is looking to further strengthen the certification system as tourists to the country continue to grow while the increasing number of online services for home-sharing and guesthouses make it difficult to track down.

Victor Morozov, a Russian traveler who arrived in Seoul on Sept. 14 on his first trip to Korea, decided to get a room in a traditional Korean home, hanok. He googled where to go, and found out that there’s a hanok village in Bukchon, central Seoul.

“It was my dream to stay in a traditional home and experience Korean culture through the host,” said Morozov. He was led to “Si Tong House” in Bukchon, a home-sharing hanok that’s listed on Kozaza, a local home-sharing platform.

He intended to stay only three days, but he and the host, Han Kyu-nam, 72, who communicate using broken English and body language, became so close that he decided to stay three more days, then another three days and so on. He had been there for two weeks when this reporter visited the hanok.

“When he arrived here, it was during the Chuseok holiday (Korean harvest festival), so I took him to a temple near Kookmin University to show him traditional events,” said Han. “While coming back, he wanted to walk down from the temple, which was located uphill, I came home first. A few hours later, I got a call from a random Korean who told me that this Russian man is lost. I got on a taxi and went to get him. Since then, I think we became friends rather than a host and a guest.”

Although there’s been more news reports about the darker side of sharing homes, there are those who are making efforts to offer tourists more than just an accommodation.

While competing against the dominant home-sharing platform Airbnb, Kozaza, a local platform that was established in 2012, a year before Airbnb came into Korea, has been making efforts to promote hanok.

“When I decided to jump into start up business on home-sharing service that specializes in Korea, I wanted to bring in hanok that have been operating either as a guesthouse or a homestay into this new home-sharing trend that’s been gaining popularity overseas,” said Jo San-ku, head of Kozaza. “As a Korean, I always admired hanok and believe there’s philosophy and science embedded in this architecture. I hoped more travelers from overseas get to enjoy them and realize the value of hanok through the home-sharing service as well.”

To do so, Jo approached those living in hanok, knocked on their doors and asked if they are interested in leasing out vacant rooms to foreigners and to join with Kozaza to offer a more unique hanok bed and breakfast experience to foreigners.

“Rather than merely offering an ‘accommodation,’ hanok should really be an experience,” said Jo. “Old hanok also come with some inconveniences such as using the shower, or small rooms, but like travelers value ryokan of Japan, I wanted them to value hanok of Korea.”

Jo even collaborated with Google and began offering the inside views of some of hanok offered at Kozaza.

Even small boutique hotels in Seoul that are listed on home-sharing services began to adopt various strategies to allow foreign travelers to experience Korean culture during their stay. A.MASS, which is located across from Changdoek Palace in central Seoul and next to the new Seoul Donhwamun Traditional Theater, a theater exclusively for gugak, that opened on Sept. 1, recently formed a partnership with the traditional theater so that their guests can have easy access to Korean traditional arts.

Mun In-sik, the hotel’s CEO, also added the hotel makes efforts to make foreign guests feel at home, such as providing the Canadian brand S0381 for hotel’s amenities and installing a rooftop pub.

“Guests can spend their evening on the rooftop looking down at the night view of the Changdeok Palace.”

On the other hand, there are also others who are trying to promote local artists and Korean contemporary art through home-sharing.

In June, four hosts who have listed their homes on Airbnb formed an art curating group called Arttrip and launched the “Art x Stay” project. By collaborating with Korean artists, the four hosts decided to turn their homes into a small private art gallery to “offer foreigners traveling to Seoul more creative travelling opportunities.”

Here is how it works: One local artist is connected to a home-sharing house, looks around and decides on a theme to exhibit old and new works. According to Lee Min-jung, head of Arttrip and a host of one of the houses, “this kind of project helps foreign travelers have a unique experience in an unfamiliar city by sleeping, eating and drinking around Korean art, while giving local artists the opportunity to be naturally exposed to foreign audiences and potential collectors.”

For the project, Arttrip sought professional help from Kim Byoung-soo, an art critic to select artists for the collaboration as well as craft explanations of the art for foreign audiences as the hosts have to be trained to explain the artists and artworks in their house to their guests.

Their first outcome was revealed in June at a home-sharing lodge in Mapo District. Korean artist Lee Gil-rae, who is known for his tree-inspired sculptures, transformed the house into an art gallery. The next house was worked on by installation artist Song Song, and starting in October, Woo & Woo’s house, has been welcoming guests as a gallery of artist Kim Min-ki under the theme “Oasis.”

According to Jo from Kozaza, “home-sharing services have emerged with the flow of time and it’s inevitable to bring negative aspects like the emergence of big hotel chains did decades ago.”

“It’s a new paradigm and you can’t stop it even though so many cities are trying to regulate it,” said Jo. “Then, we might as well make the most of the opportunities and do it right.”