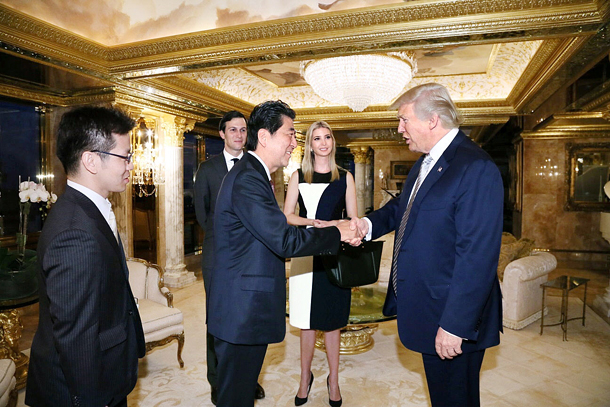 Japanese Prime Minister Shinzo Abe met with Democratic presidential candidate Hillary Clinton when he visited the United Nations in New York in September. Clinton visited where Abe was staying. It may have been Clinton’s election campaign strategy as many Japanese companies are based in Ohio, one of the battleground states. The meeting also meant that Abe was preparing for Clinton’s victory, as she was leading Republican candidate Donald Trump slightly at the time.

Also, Abe met with a heavyweight in Trump’s camp: Wilbur Ross, Trump’s pick for Commerce Secretary. Ross is known as a pro-Japanese figure with long relationship with Japan. Abe reportedly asked for understanding of the Trans-Pacific Partnership, it was revealed after Trump’s victory. Initially, Ross had supported TPP, but now, he is with Trump on the issue.

Abe is known to be obsessed with TPP. Right before the U.S. Presidential election, Abe went on with the TPP ratification process and successfully had the lower house pass the bill the day after Trump’s election, a pressure on the president-elect. TPP is interconnected with Abe’s domestic and foreign strategies. He wants to set up a U.S. and Japan-led trade order to check on China.

It is a preemptive move before China establishes new multilateral trade and investment rules. TPP is a sign of America’s pivot to Asia. Japan wants to relate TPP with security order comprehensively. Domestically, TPP is related to Abenomics. Abe has used deregulation for TPP as a growth strategy.

In a meeting with Trump in New York on November 17, Abe explained the TPP ratification process in Japan. He also promoted diplomacy to keep TPP at the APEC summit meeting in Peru. However, Trump remained firm. Four days after the meeting, he said that he would announce withdrawal from TPP on the first day of his inauguration next year.

However, Abe did not give up. He extended the Diet session to mid-December for ratification of TPP in the upper house. On Dec. 1, Abe said, “Japan has the role to deliver the importance of making the rules of free trade to the world. We will pass the bill as soon as possible to persuade the United States the meaning of TPP.” He is determined to convince Trump and save TPP. Japan is watching Trump’s view on the U.S.-Japan alliance and approach on China.

Japan is getting a grip on itself in preparation for the Trump variable. Japan seems to have strategic patience to turn Trump’s attention to Asia from America First and isolationism. The beginning of Trump’s era forewarns changes in the Asia-Pacific region. It may bring another shockwave in addition to China’s sudden rise. Korea needs to minimize the domestic turmoil’s impact on foreign relations.