At Malibu plant, full steam ahead

At Malibu plant, full steam ahead 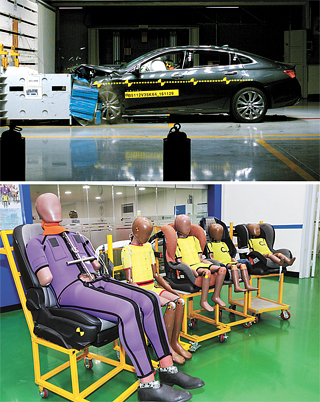 Top: GM Korea’s Chevrolet Malibu undergoes a crash test at the company’s safety center in Bupyeong, Gyeonggi. Above: A family of test dummies. The dummy warehouse has about 60 models of various sizes for crash testing. [GM korea]

INCHEON - GM Korea’s new Chevrolet Malibu barrels in down a 180-meter test track at a speed of 64 kilometers (40 miles) per hour and crashes into a stack of blocks inside the automaker’s Bupyeong manufacturing plant.

One side of the car’s front face is torn apart, with sharp, hideous metal pieces sticking out of the corner.

Yet, the cabin space including the front row’s leg room is well-preserved.

The front door, which is crucial when evacuating the passenger in a car crash, operated normally. Airbags for both the driver and the passenger deployed as they should have. The green paint on the dummy’s head smudged a little on the ceiling, yet the dummies weren’t crucially damaged.

A test like this is conducted at least 150 times before GM Korea launches a model. What’s demonstrated is called a “40 percent offset crash test” where about half of the vehicle’s front smashes into an object to see what happens when the car collides with another vehicle.

GM Korea, the nation’s third largest automaker, showed the Korean media the manufacturing process of its best-selling, new Malibu at its engineering center and production line on Tuesday.

“Thanks to the popularity of the Malibu, the operation rate of this plant which was about 70 percent now is in full operation,” said Cho Yeon-soo, vice president of the manufacturing line. “We are going to continue our successful streak in order to deliver the car to the reserved customers at least in one month.”

Chevrolet launched its new Malibu in May and the automobile instantly landed the first spot in the midsize sedan market in Korea. Its sales as of October accounted for 35 percent of market share in the same segment followed by Renault Samsung’s SM6 and Hyundai Motor’s Sonata. It sold 30,000 accumulated units of the Malibu this year alone as of November.

GM Korea considers “safety” as the main driving force behind the popularity of the Malibu.

“With the diverse lineup we launched this year, I expect GM Korea to easily achieve a two-digit market share as a whole within this year,” Cho said.

GM Korea’s Bupyeong production line, established in 1962, is one of the nation’s oldest auto plants. It comprises two lines: the first is responsible for manufacturing the compact sedan Aveo and compact Trax SUV while the second one handles he Malibu and Captiva SUV. The production line is capable of churning out 360,000 vehicles per year. Although the plant has aged, its top-notch facilities ensure the vehicle’s safety.

The engineering center in charge of safety assessment is divided into five sectors. One of them is the crash-test space; the others are dummy warehouse, airbag deployment test center, pedestrian protection test center and impact and strength tests.

The dummy warehouse had some 60 models of various sizes. A dummy costs an average of 200 million won ($170,280), but others equipped with more high-tech sensors can cost up to 600 million won.

From carving out steel plates to shaping the car’s structure to assembling each element, the entire step needed to make one Malibu takes place at the Bupyeong’s production line. The Korean Malibu is made here, and since August, it started exporting additional cars to the Middle East.

What GM Korea unveiled to the Korean media among the four major steps included in the production line, was the last one, which is the assembly line. The previous steps such as the steel-pressing, bone-structuring and painting process were too dangerous to reveal to outsiders.

Passing through three main assembly lines - inspection, chassis and trim - on a conveyor belt, the bare-bones structure of the Malibu slowly transformed into a car. From equipping the front hood, wheels and windows to installing the interior parts such as seats and carpet, workers remained at their stations to add their parts to complete a car. The process included less support from the computerized system than expected. The assembly was mostly done by the workers. After every part is installed, the car is passed to the test-driving test center and then to the dealership.

The popularity of Malibu has meant that employees are putting in extra hours in the last few months, including weekends.

However, employees are very “excited and encouraged” by the market’s good response, according to Cho.