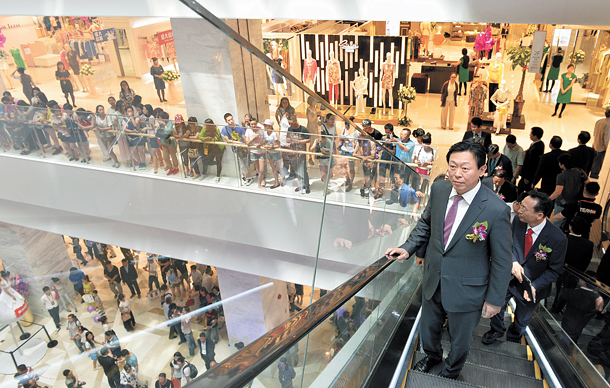 In this file photo from May 31, 2014, Lotte Chairman Shin Dong-bin takes a tour of Lotte Department Store’s fifth Chinese location in Shenyang, Liaoning province, after an opening ceremony. The store is one of several Lotte outlets in China that had safety inspections under a crackdown by the Chinese government. [joint press corps]

China’s anger at the deployment of a missile defense system in Korea is once again hurting Korean business.

Lotte Group, the nation’s fifth largest conglomerate, has become a target of various inspections in China, including a tax audit and health and safety evaluations.

According to numerous sources including the Korean embassy in China, some 150 factories, storage facilities and stores of Lotte affiliates in the country have come under the scrutiny of the government since Tuesday. They include units of Lotte Confectionery, Lotte Chemical, Lotte Department Store and Lotte Mart. The crackdown also included a tax audit of the Lotte Group’s Shanghai headquarters.

It’s the largest investigation that Lotte has experience since it entered the Chinese market.

“On Nov. 29, the Chinese government started inspecting Lotte branches in Shanghai, Beijing and even Chengdu,” said a Lotte spokesman. “And on the following day investigation teams simultaneously swooped into Lotte Marts.”

The animus of the Chinese government is fairly evident. One of the Lotte buildings inspected for safety was a multiplex that includes a Lotte Department Store, movie theater and restaurant in Shenyang, Liaoning, which received an award from the local fire department earlier this year for safety.

The Korean government has chosen a Lotte Group golf course in Sangju, North Gyeongsang, as the site to deploy the Thaad system.

After the news hit, Suh Jae-yoon, managing director of Lotte Shopping in China, who was in Seoul, left for Shanghai on Thursday.

“Although there have been random safety checks by the fire department, an investigation on such scale and a simultaneous inspection in multiple number of building and branches is unusual,” said a Lotte Group official.

Since the news broke of the Chinese government crackdown on Lotte Group, the retailer’s shares fell on Friday. Lotte Shopping fell 1.41 percent compared to the previous day to close at 210,500 won ($179.87). At one point the stock price plummeted more than 5 percent but eased later in the day. Prices of other Lotte affiliates suffered as well. The beverage company Lotte Chilsung saw its shares drop more than 2 percent, Lotte Chemical dipped 0.44 percent, Lotte Food fell 0.9 percent and Lotte Insurance was down 1.61 percent.

This is not the first time that Korean businesses were suspected of being targeted by the Chinese government, which openly opposes the deployment of Thaad on Korean soil in fear that it will come under the surveillance of the U.S. government.

Since August, TV shows that were supposed to feature Korean actors and actresses were cancelled while those that were filmed before the heightened diplomatic tension were edited to remove Koreans’ scenes. Even commercials featuring K pop singers and popular actors were dropped.

Cosmetic companies’ are also seeing their share prices fall. LG Household & Healthcare saw its share fall to its lowest level this year the day after Chinese news reported that the government was planning even tighter regulations on Korean entertainment and related industries.

The Chinese government was also said to have pressured Chinese travel agencies to reduce tours to Korea.

“We expect the inflow of Chinese tourists to Seoul will see growth fall below 5 percent starting last month and to get to the point of year-on-year declines,” said Sung Joon-won, a Shinhan Investment analyst.

According to a report by the Korea International Trade Association released Nov. 24, the number of Korean food and cosmetics that failed to get through China’s customs in the first nine months of this year totalled 148, with a particular increase since the Thaad decision was announced in July. Only Taiwan, which Beijing considers a renegade province, had more products rejected.