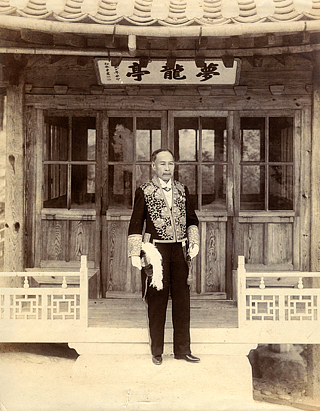 An exhibition is underway at the National Folk Museum of Korea that sheds light on the history of the modern suit in Korea. Seen here is Kim Ga-jin (1846-1922), a government official, wearing a modern suit as his uniform after the Joseon Dynasty (1392-1910) changed the government officials’ uniform from hanbok (traditional Korean clothing) to the Western suit through law revisions in 1895 and 1900.

Also on display is the iron (above) a dressmaker in Jongno used in 1916 and a sewing machine a tailor used in the 1960s.

Daegu is often considered the hub of the Korean textile industry, and the exhibition is the folk museum’s collaboration with the DTC Textile Museum in Daegu. [NATIONAL FOLK MUSEUM OF KOREA]