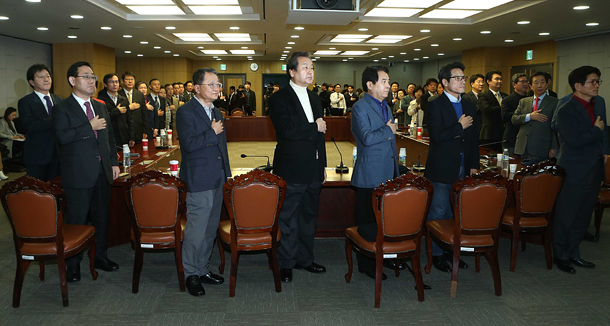 Non loyalists to President Park Geun-hye in the Saenuri Party have an emergency meeting in the National Assembly on Sunday to discuss their next steps as opposition parties push for the impeachment motion for Park. [OH JONG-TAEK]

A decisive week for President Park Geun-hye begins as she faces possible impeachment at the National Assembly, a series of public hearings on the abuse of power scandal dooming her presidency and a deadline imposed by her own ruling party to declare her voluntary resignation.

As the countdown to the impeachment vote on Friday began, the National Assembly also geared up to look into the abuse of power scandal involving Park, her longtime friend Choi Soon-sil and their associates. A special investigation committee of the National Assembly will receive briefings from the Blue House, including the presidential secretariat and the Presidential Security Service, today.

A wide range of allegations of Choi’s unlawful influence over state affairs will be examined during the session. Lawmakers are expected to look into Park’s conspicuous lack of action during the crucial hours after the Sewol ferry’s sinking on April 16, 2014. Often referred as the “seven-hour mystery,” suspicions were raised that Park might have been having some form of cosmetic procedure arranged by Choi.

The prosecution, in its indictments of Choi and An Chong-bum, Park’s former chief policy aide, said Park colluded with them to force the conglomerates to pay donations to cultural and sports foundations and the money was later misappropriated, possibly to create slush funds. The prosecution said the companies paid up because they feared the government’s authority over business permits and tax probes.

Suspicions were also made that some gave money in return for presidential pardons of the convicted tycoons or sanctions for mergers. If the allegations are substantiated, they can become bribery charges against Park as well as the tycoons.

The hearing on Wednesday could be more explosive as lawmakers will grill 27 witnesses including Choi and other key Park associates who served in the Blue House. Former presidential chief of staff Kim Ki-choon and former civil affairs senior secretary Woo Byung-woo are on the witness list.

The possibility is high that some will refuse to cooperate. Lawmakers said they are determined to make them testify by issuing subpoenas. “When the witnesses refuse to attend hearings, the special committee of the National Assembly can issue subpoenas to force their appearances. If they reject the subpoenas, they can face up to five years imprisonment,” a source from the committee said.

Wednesday is also an important political deadline. Within the ruling Saenuri Party, a group of lawmakers who aren’t in the pro-Park faction has said the president must make public her position on their ultimatum by 6 p.m. on Wednesday. They said she must promise to immediately surrender her control over the government and to step down on April 30, 2017. If she refuses to make that vow, they said they will vote for the impeachment motion on Friday.

On Thursday, the impeachment motion, submitted on Saturday, will be introduced to the plenary session of the National Assembly in order to hold a vote on Friday. A secret vote should be held between 24 and 72 hours after the motion is introduced. The motion will be deemed abolished if no voting takes place during the period, according to Article 130 of the National Assembly Act.

The Blue House remained silent on Sunday. Speculation was high that Park may meet the non-Park-loyalists of the ruling party, but a presidential aide said Sunday that nothing had been decided. A proposal was delivered to the lawmakers by senior presidential political secretary Hur Won-je.

The non-Park-loyalists said Sunday they had no intention to attend such a meeting.

In a statement issued last week, Park said she wanted the ruling and opposition parties to decide her fate, including a plan to shorten her presidential term. “I will step down based on that timeline and lawful procedures,” she said at the time.

The statement was a game changer because the non-Park-loyalists, who initially supported impeachment, changed their position. The ruling party, then, adopted the stance last week that Park must resign in April and a presidential election be held in June, sparking hopes that a so-called “orderly exit” for Park was possible.

The ruling party wants more time to prepare for a presidential election. It fears that impeachment could be much faster than the “orderly exit.”

Saturday’s largest-ever public protest demanding Park’s immediate resignation — and even an arrest for a criminal investigation — quickly changed the mood. The non-Park-loyalists held a meeting Sunday afternoon to discuss their position on what they will do with the impeachment motion if Park accepts their demand and declares that she will step down in April. No conclusion, however, was made as of Sunday evening.

Rep. Yoo Seong-min, an icon of resistance against the president, however, differed. “Even if Park accepts the April resignation, the opposition parties may reject it. Then we have to participate in the voting,” he said.