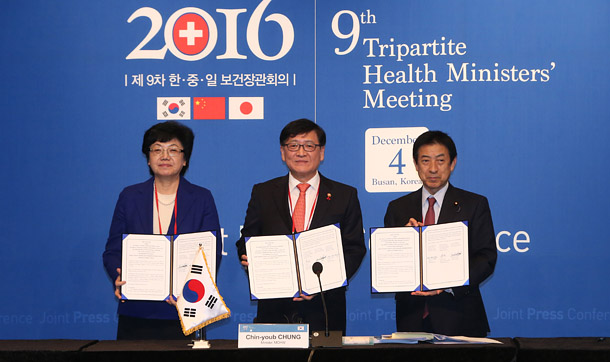 Three health ministers from China, Korea and Japan pose for a group photo at the Chosun Hotel in Haeundae Beach, Busan, on Sunday, after they signed an MOU to share big data on infectious diseases. The annual trilateral meeting was launched in 2007 to guard against the spread of infectious diseases to neighboring countries as economic, cultural and human exchanges continue to increase among the three countries. From left: Li Bin, China’s minister of the National Health and Family Planning Commission; Chung Chin-youb, Korea’s minister of health and welfare and Yasuhisa Shiozaki, minister of health, labor and welfare. [SONG BONG-GEUN]