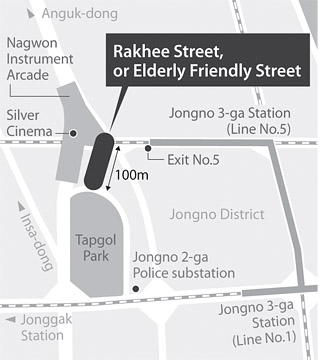 By renovating street signs and painting the cracked walls of Nagwon-dong in central Seoul, the city government says it’s not trying to bring anything new to the streets. Quite the contrary, it is taking the area back in time to the 1960s and ‘70s.

As part of a project from last year, the Seoul Metropolitan Government injected 260 million won ($221,800) to renovate the streets of Nagwon-dong of Jongno District and create an environment friendly to both the elderly and the young.

Some 5,000 to 6,000 senior citizens are estimated to gather around Tapgol Park every day, according to the city government.

The shop signs in the 100-meter (109-yard) street connecting Tapgol Park to the Nagwon Instrument Arcade were changed, using bigger letters and styles once commonly seen in downtown Seoul of the ‘60s and ‘70s.

A side of a building on the street was recently painted with scenes from classic movies screened decades ago, including “The Coachman” (1961) and “My Mother and Her Guest” (1961).

The city government signed an agreement with 11 stores along the street to provide free drinking water to passersby.

It installed devices for senior citizen to rest their canes on restaurant tables and in bathrooms. It also installed an automated external defibrillator in the street.

“Many senior citizens patronize the area around Tapgol Park because of its low-priced restaurants and old-time movies,” the city government said in a press release. “But this area has also been known for a lack of security and old and dirty streets.”

“Which is why the Seoul Metropolitan Government has established a project to change the streets around the park to fit the needs of the elderly and still remain affordable and friendly to all visitors,” said Kim Won-ki, an official of the Design Policy Division. “The first section we worked on is to be called Rakhee Street, or the Elderly Friendly Street.”

That street, which runs from the north gate of Tapgol Park to the Nagwon Instrument Arcade - which on its top floor offers a theater that screens only classics from the ‘60s and 70’s - has long been occupied by hole-in-the-wall restaurants that offer menus at prices that themselves seem a blast from the past, with a bowl of noodles or a dosirak (packed meal), including rice, kimchi and fried eggs, costing only 3,000 won ($2.55). The oldest restaurant here, more than 60 years old, sells haejangguk, or hangover soup, for just 2,000 won.

A barber shop gives haircut for only 3,500 won, and visitors can enjoy a cup of coffee at a cafe next door, which has a DJ booth stocked with vinyl records.

“I come here often because the prices are quite affordable,” said Jung Choon-sik, a 76-year-old visitor.

Sugamo Street in Tokyo is also popular with the elderly because of services geared for them. Shop signs are completely in Japanese instead of English. The entrances to stores have flat thresholds to make it easier for customers in wheelchairs.

Nagwon-dong is not as spruced up as that.

When a Korea JoongAng Daily reporter visited the government-renovated street on Thursday afternoon, the entrance was occupied by a group of men and women who sat smoking on blankets, and a highly inebriated man was nodding away in front of a restaurant, barely able to stand. “Urination Banned” signs plastered the walls of the restaurants along the streets.

And with only 11 out of 24 stores along the street having agreed to change signs under the city government project, the street had an unruly mix of 21st century and traditional store signs.

Additionally, what the city government calls a mini-stage for residents to use, with a painted caricature of TV host and singer Song Hae at the entrance of the street, was partly covered with boxes of soju bottles and produce when the reporter visited.

“I come here often, but I am not sure what has really changed here,” said Kim Hak-cheol, a 74-year-old.

The city government says the project is still in its initial period.

“The Seoul city government plans to expand the program into 2017,” said Kang Hyo-jin, director of the Design Policy Devision. “It will inject an additional 1 billion won of its budget to renovate the streets and clean up the environment.”